The Republican Party is looking to expand its “anti-woke” franchise to take on a shadowy global financial services firm that, until 2020, most people had never heard of. Now that BlackRock and Larry Fink, who is Jewish, have become so ubiquitous in the mainstream political consciousness, it would be impossible for a political party that acts as controlled opposition for increasingly frustrated White political interests to ignore. The GOP may not be woke, but it is only pretending to be awake. 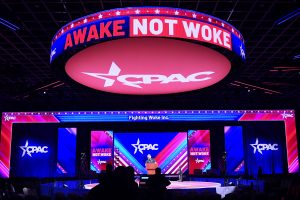 Before we go any further; if you’ve never heard of BlackRock, I recommend you start here. To quickly get you up to speed: BlackRock controls over $10 trillion in assets and owns between 4 and 8% of every major company that you’ve ever heard of, 12-18% in the case of media companies: Fox 18%, CBS 16%, Comcast 13% – which owns NBC, MSNBC, CNBC, and SkyNews, CNN 12%, Disney 12%, Apple 6%, Microsoft 6%, Wells Fargo 4%, JP Morgan Chase 4%, Amazon, Tesla, Alphabet, Cisco, Berkshire Hathaway, Johnson & Johnson, Visa, Mastercard, Goldman Sachs, United Health Group, Meta, Facebook, Exxon Mobil, Home Depot, Pfizer, Chevron, Costco, Eli Lilly, Bank of America – you get the idea. 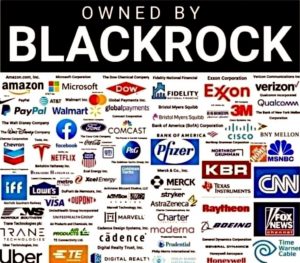 BlackRock’s biggest shareholder is Vanguard, which, like BlackRock is a shadowy global financial services firm that has $7 trillion in assets and has similar stakes in all of the above-mentioned companies and many more. State Street, the 3rd biggest global financial services firm in the world, is owned by BlackRock. Who is Vanguard’s biggest shareholder? BlackRock.

BlackRock’s CEO, Larry Fink, actually got his start at Blackstone with Stephen A. Schwarzman, who is also Jewish. The pair knew each other from failed Jewish financial services company, Lehman Brothers. When it was time for Fink to spread his wings, he joked with Schwarzman about naming his new company BlackPebble or BlackRock to confuse their employees. I was always under the impression that Jews were supposed to be really funny. 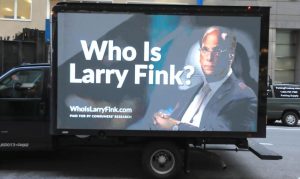 Larry Fink went on to greatly surpass Blackstone in terms of assets under management and perhaps even Jewish prestige – however they measure that sort of thing. BlackRock was chosen by the U.S. Treasury under Barack Obama to manage toxic mortgage assets owned by Bear Stearns, AIG, Freddie Mac, and Morgan Stanley in the aftermath of the 2008 financial crisis. 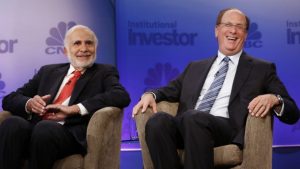 In the wake of Donald Trump’s election in 2016, BlackRock rapidly expanded its Environmental, Social, and Corporate Governance (ESG) initiatives in the United States and Europe. Its stated purpose for doing so was to lead a transformational revolution in the financial sector. It started with pressuring energy companies on climate initiatives. Then it pushed for more women on corporate boards. Then in 2018, began divesting from major companies like Walmart and Dick’s Sporting Goods in order to pressure them into no longer selling firearms. 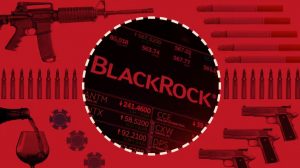 Unrelated to ESG, but substantial, in March of 2020, the Federal Reserve selected BlackRock as the primary bond buyer for the U.S. government as part of its massive corporate bond-buying program in the depths of the COVID-19 financial turmoil.

In April 2021, a former sustainable investing ESG chief for BlackRock wrote that BlackRock’s ESG initiatives were creating a “dangerous placebo”.

Then in August 2021, the Wall Street Journal editorial board wrote an op-ed alleging that BlackRock was pressuring the SEC to create rules that would force publicly-traded companies to disclose things like compliance with climate initiatives and diversity and inclusion. The Journal’s concern, of course, wasn’t with Fink’s true motivations, but with ESG’s impact on the health of publicly-traded markets.

The general line from the right has been that Fink and BlackRock are using their stake in virtually every publicly-traded company on the planet to push a “woke” or “progressive” agenda. Some conservative commentators have accused BlackRock of “going woke” to hide its funneling money to China. Conservatives can no longer do that with Russia, as BlackRock has made the recent decision to completely exit the country.

Fink has pushed back and declared that BlackRock is not “woke” saying that:

“Stakeholder capitalism is not about politics. It is not a social or ideological agenda. It is not ‘woke.’”

On this, Fink may not be entirely wrong. It’s not about politics, social justice, or ideology. It is about nothing other than the universally shared hatred Jews have for White people and ESG is a mechanism for dismantling and destroying everything it perceives as White political or financial power.

Fast forward to today and a coalition of 19 Republican attorneys general has decided to take Larry Fink and BlackRock head-on by standing up a powerful campaign of strongly-worded letters chastizing Fink for his irresponsible stewardship and prioritization of left-wing political initiatives.

Meanwhile, Senator Tom Cotton, a Republican from the state of Arkansas, published his letter to Fink as part of a press release on July 27th. Cotton adds a little bit of bite to what has so far just been a lot of GOP barking, centering on the issue of anti-trust. Cotton correctly alleges that BlackRock is in violation of U.S. Anti-Trust legislation due to its cartel-like actions in joining Climate Action 100+ to force companies in which it is the largest shareholder to reduce drilling for oil and gas. Cotton demands that Fink provide a list of companies BlackRock has engaged with, collaborated with, liaised with, and against whom they have threatened further action:

Senator Cotton and other Republicans are not interested in getting to the truth about BlackRock’s motivations or even scratching the surface of its involvement in real estate speculation in which BlackRock was buying up homes in order to drive homebuyers out of the market, market manipulation through at least two major financial crises, the Dollar Store takeover of rural White America, and investment in weapons and drone companies that are used to target innocent and unarmed Palestinians and others all over the world. Cotton could sponsor a bill that closes the carried interest loophole – something that would actually hurt BlackRock – but he won’t. None of them will.

Whether the GOP takes its strongly-worded letter-writing bonanza any further remains to be seen, this is the template for taking fiery controversial issue that is chock-full of anti-semitism and a rallying point for White collective interests and generating a psychological reactance in the body politic until BlackRock becomes part of the anti-woke bag of Republican tricks. Kinda like the Disney groomers of 6 months ago. What happened to them? Lather. Rinse. Repeat.