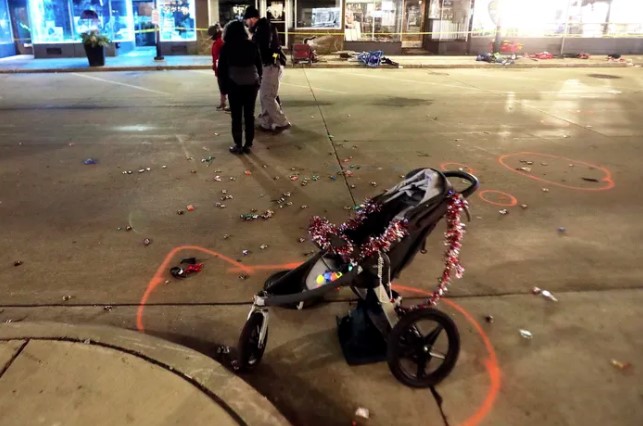 Recently a radical black BLM supporter committed a terror attack on innocent White people walking in a Christmas parade in Waukesha, Wisconsin. Long a favorite tactic among foreign terrorists, he used a motor vehicle to mow down and kill a total of 6 victims, one of which was only 8 years old. Given the racial context of the atrocity, it was inevitable that the American media would downplay the motivations of the killer and ultimately black-out coverage of the massacre entirely.

The process of memory-holing Waukesha was well in hand until demonstrators held a protest to demand justice.

Almost instantly, in a “rare joint statement” both American senators from Wisconsin immediately condemned the protest. Ron Johnson (R) and Tammy Baldwin (D) warned against groups attempting to “exploit the tragedy” and ordered everyone to “cease and desist” from any further public demonstrations. For American political leadership, white people demanding justice constitutes an immediate terror threat capable of uniting both sides of the political aisle in a frantic attempt to get the situation under control. The incredible speed at which these corrupt goons tell White people to “cease and desist” is absolutely breathtaking. Needless to say, political leaders chose the exact opposite stance during the Black Lives Matter rioting of 2020, and actively encouraged political protests.

To a naïve outsider, the failure of Republicans to politically capitalize on an anti-White terror attack would have itself seemed mysterious. After all, Democrats had no qualms about jumping to conclusions on any number of volatile racial incidents over the last year so long as blacks were the purported victims. Why then would a party ostensibly representing “White America” desperately stand on the brakes at the first hint of justifiable and politically bankable White outrage? Because Republicans have never represented White America and exist to peacefully sunset them. If it wasn’t because of a cynical GOP operation in the 1960s that tied them to the evocation of White identity politics, the entire farcical premise of Republicans standing up for working class White people would’ve never left the ground in the first place. As it stands now, they have fully embraced their roots as spineless, conniving grifters. It isn’t an accident that Ron Johnson’s Twitter post of an article about his condemnation of Waukesha protesters links back to a website run by the Falun Gong.

Twisting genuine outrage as “exploitation” of a “tragedy” (notice the sanitizing language applied to an actual domestic terror attack) begs the question of how one would ever determine what constitutes authentic public uproar. Were the BLM “protests” of 2020 “exploitation” of “tragedies”? Did Democrat politicians demand that their constituents “cease and desist” while officials conducted an investigation “without outside interference”? If you contrast what BLM and antifa were rioting over in 2020 versus what just happened in Waukesha, which one merits more heartfelt outrage at injustice? A black man hopped up on anti-White propaganda and racial hatred intentionally drove his SUV into a fucking Christmas parade. Under any other circumstances this would be looked on as a horrific case of domestic terrorism. It sure as Hell looks like “exploitation of tragedies” was directly responsible for convincing Darrel E. Brooks to commit a heinous racial terrorist attack.

Imagine if this had been a white Klansmen that drove his pick-up into a black Christmas parade. The American and international media would be howling for vengeance and running news stories about the massacre 24/7 for the next two years. Laws would be passed, memorials would be erected, and you could bet your ass we’d have to kiss the 1st amendment goodbye and enact new hate-speech statutes. We have dead white people instead so our own politicians are wagging their fingers at us for daring to complain.

There is one rule in America about “exploiting tragedies” though:

You can only ever do it if it directly harms white people.

“Identity Crisis”, a Story from the Near-Dystopia