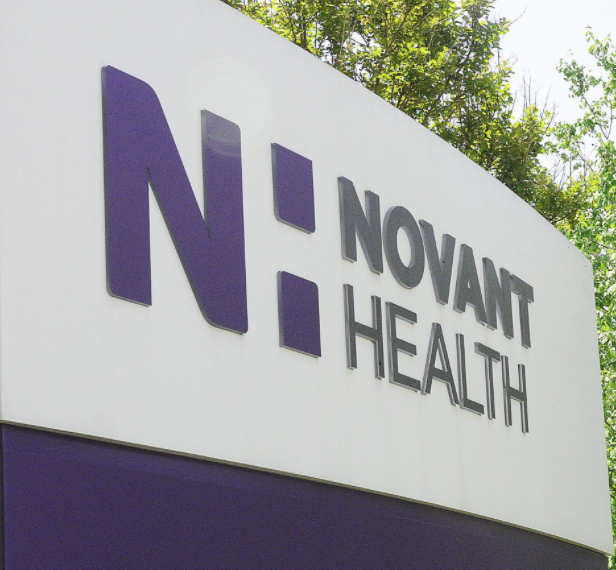 When they aren’t making the news for raking in 1 billion dollars in taxpayer money while delivering piss-poor, inadequate service to impoverished communities, Novant Health apparently still finds time in their busy schedules to literally discriminate against White employees. Putting aside for a second that Novant is bilking the state of North Carolina by claiming not-for-profit tax exemptions while being as miserly as possible with charity care, they actually developed a strategic plan to “diversify” their leadership and proceeded to axe 5 White employees in a matter of months as part of the process. A so-called “Diversity and Inclusion” initiative consisting of 3 distinct phases was announced and implemented over the last five years with predictable results. Apparently phase 2 of this scheme should’ve just been titled ” Operation Fire Honky” since it explicitly targeted the senior leader level for a healthy dose of “diversity”.

This is ultimately how David Duvall lost his job after working for five years as senior VP of marketing and communication. In an unsurprisingly ironic twist, Novant was forced to create two new positions to make up for the loss of one productive White guy, and it took them 10 months to find a strong black female capable of filling one of those new roles. Corporate America is clearly so anti-white they are more than comfortable with weathering a significant loss of talent in their upper echelons for the sake of sticking it good and hard to the Caucasians. One can only wonder if a corporation that behaves this maliciously to its own employees on the basis of race isn’t also engaged in institutionalized malpractice against White patients on a mass scale.

David Duvall’s attorney easily convinced a jury that his melanin deficient client was in fact axed for being a honky, and they awarded him 10 million dollars.

How did Novant deal with this crushing defeat? Publicly they stated a belief in “robust diversity and inclusion programs” which “can co-exist alongside strong non-discriminatory policies that extend to all races and genders, including white men.” While they were furiously declaiming their innocence and actually offering a tiny acknowledgement that White men do exist and deserve protection, their internal email to employees tells a much darker story. 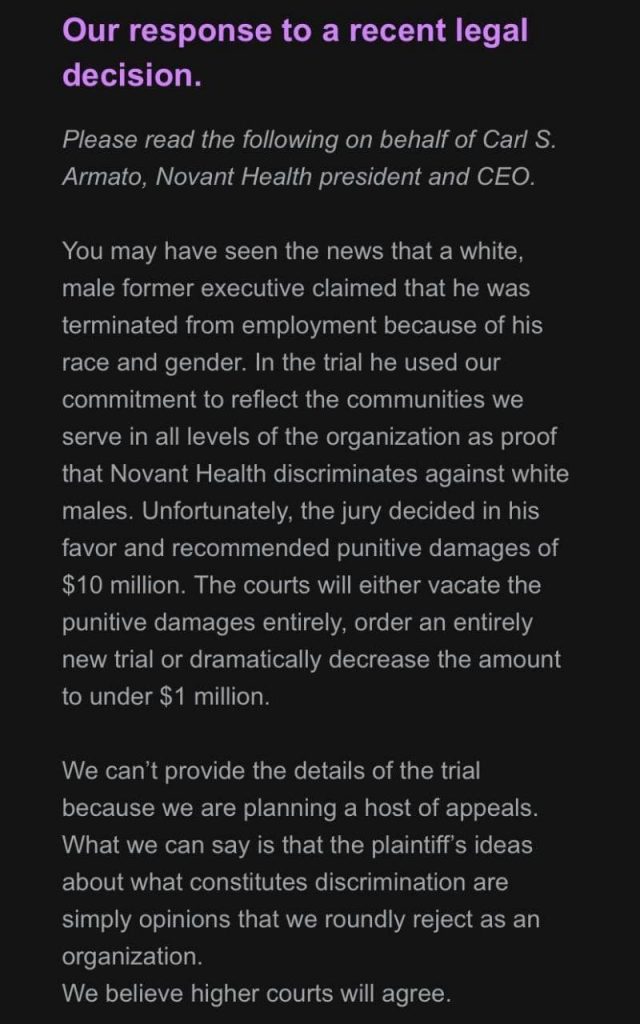 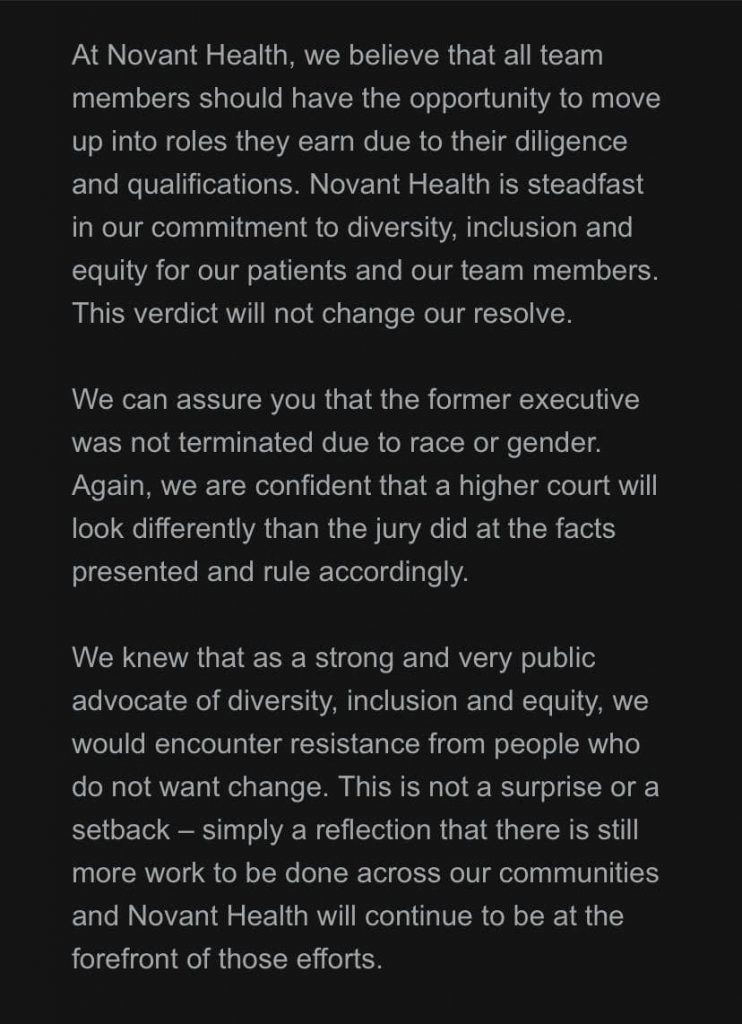 Rather than assure terrified White employees that Novant isn’t in fact looking to “fire their lily-white asses”, Novant instead doubled down on their commitment to the self-same policies that lead to David Duvall’s termination. There is no affirmation that Whites deserve protection from discriminatory policies, just a full-throated howl of defiance against being held accountable for their anti-white racism. Stating that they “roundly reject” what their former employer construes as discrimination, Novant is clearly affirming a belief that White people cannot be discriminated against. This shouldn’t come as a surprise from a corporation that openly held grueling struggle sessions for days at a time against the White male senior management. Neither should it be a shock that Novant CEO Carl S Armato gets a total compensation of 4 million dollars to terrify his White employees with D & I programs designed to terminate their fucking jobs while he collects another corporate bonus.

This is the reality of being White in America, it means having to deny your race just to get into college, and then losing an entire career because anti-white policies are enshrined at the highest levels of corporate institutions. Novant has openly worked to make life harder for White employees and White patients while taking the tax money paid by those very same individuals to fund its operations.

At least for now, a White man finally did get some justice in this rotten, wicked country.

The Science™: Pfizer’s COVID Vaccine Is More Dangerous Than COVID