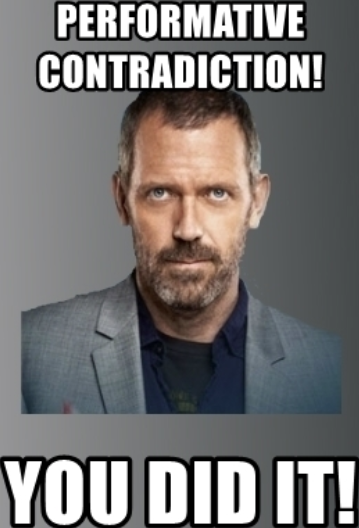 The ADL and other Jewish “advocacy” groups love to clutch their pearls over the so-called canard of Jewish influence on American politics. They decry  “millennia-old stereotypes of Jews as disloyal, greedy abusers of power” but then with zero trace of irony take swift public action that totally confirms the anti-Semite’s initial premise. In propositional logic, this is known as a performative contradiction. You cannot claim that it’s an anti-Semitic “myth” to state Jews have outsized political power and then immediately summon powerful political connections to ostracize and/or silence anyone making the claim. Obviously you really do have disproportionate political influence otherwise you wouldn’t be able to leverage serious consequences on whoever dares to object to the length of your grasp.

For a real-time demonstration of the contradiction, let’s turn to a recent example:

On Wednesday, September 29th, 2021, Kamala Harris was visiting George Mason University when a student raised an entirely reasonable objection to the United States providing so much foreign aid to Israel given their mistreatment of Palestinians. Harris replied that “your truth cannot be suppressed” which to normal people sounds like an insincere reification of the right to free speech. Jews saw it a bit differently. That same day the Israeli press was apoplectic, showing a startling fixation on American politics for an ethnic group that claims allegations about their influence on other nations is just a conspiracy theory. Apparently Jews in both Israel and America constantly survey our elected leaders for any hint that they might waver even slightly in their support of the Jewish state. Like a flock of beady-eyed hawks, they are ever vigilant and always watching for the merest hint that an American with power might not acquiesce to their incessant demands.

By the very next day, Harris’s office was in frantic communication with Jewish groups and Jonathan Greenblatt was gloating that she had reaffirmed her loyalty to Israel. Of course the leader of the organization that claims Jews don’t have disproportionate power and influence was literally on the phone with the vice president of the United States seeking assurances that she in fact wasn’t seriously entertaining criticisms of the deplorable actions of the state of Israel. The conservative Renfields screeched their dismay that anyone would speak ill of their vampiric masters while the Democrats desperately tried to mend an unbroken fence. 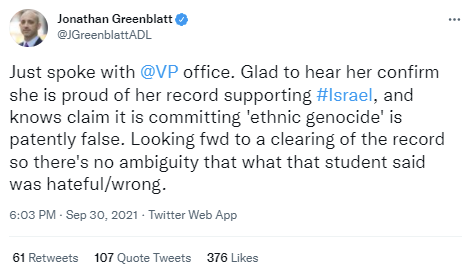 Greenblatt of course didn’t hesitate to punch down on a college student or call her “hateful” for objecting to the war-crimes and human rights abuses Israel heaps upon Palestinians. Nor did he have any second thoughts about underlining the fact he has the ear of the American VP and that she’s desperate to prove her loyalty. This is a poor way to counter the “myth” of Jewish control, but apparently Greenblatt is so secure in his absolute dominion of America’s political establishment that he fears no consequences for such arrogant displays of power.

If anyone claims that Jews DON’T wield an absolutely staggering amount of American political influence, just show them this example.