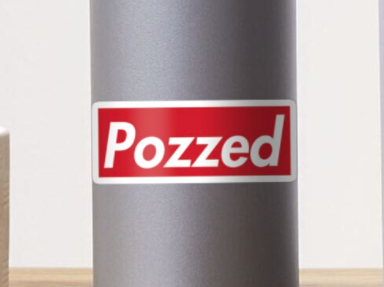 One of my favorite movies of all time is “Predator”. If Predator isn’t also featured on your personal top ten list, I suggest getting your testosterone levels checked immediately. Aside from being one of the very best action films of all time directed by the legendary John McTiernan of “Diehard” fame, it starred Kevin Peter Hall, a 7′ 2″ black actor famous for his role as the big nasty alien hunter that slapped Arnold Schwarzenegger around like a little bitch. Hall was later involved in a car accident in the fall of 1990 with serious injuries. After receiving a transfusion to combat traumatic blood loss from the crash, he contracted HIV and was dead by the following spring. 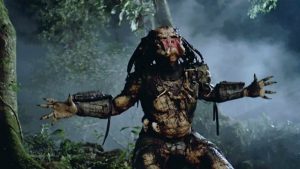 Another tragic victim of Big Pharma.

What’s especially horrifying about this completely unnecessary death is that as early as 1982 “medical experts” with more than two functioning brain cells had strong reasons to believe AIDS was a bloodborne pathogen. Despite warnings from epidemiologists, the blood products industry and health ministers failed to take action. The main objection is something that should ring familiar to anyone tuned into current controversies surrounding Covid and Covid vaccines: There was no strong scientific evidence that the blood supply had been compromised, which somehow became transmogrified into proof that said blood supply couldn’t be contaminated. Fears were downplayed and the official narrative was consciously juggled to allay all reasonable suspicions in order to serve political and financial goals. If critical thinking was actually taught in education, everyone would immediately recognize an Argument From Ignorance when they saw it. For obvious reasons exercising this level of intellectual autonomy is strictly discouraged and tens of thousands died unnecessarily from HIV acquired in contaminated blood products.

The pharmaceutical industry engaged in legendarily wicked practices during the 1980s and beyond, such as transferring contaminated blood products into foreign markets, failing to adequately test blood donations, rejecting the very idea of screening for high-risk sexual activities, and pretending that gays raising objections about discrimination were a serious roadblock.  Needless to say, all these deadlocks and logjams were ultimately motivated more by pure, unadulterated corporate greed than anything even faintly resembling the public interest. Blood products were lucrative and destroying them or implementing rigorous testing was going to deeply cut into the profit margin of their manufacturers.

Fast forward into the 1990s, and even as people like Kevin Peter Hall were still dying of contaminated blood transfusions, a new dangerous pharmaceutical product was being developed by Purdue Pharma. In 1996 Oxycontin was unleashed like a great white death on the United States, kicking off an unprecedented tidal wave of destruction that has by now killed close to a million people. Once again, a lethal pharmaceutical product was allowed to wreak havoc because shoddy, easily debunked “scientific” claims or non-claims were accepted as reliable proof. Small studies or studies with obvious methodological problems were leveraged in the service of a for-profit medical industry and an ever escalating death-toll resulted.

Today we are in the midst of another public health crisis, and as usual, the medical establishment, the CDC and the government are scampering around like a dozen monkeys all trying to fuck the same football. First the initial pandemic and entirely reasonable precautions about it were downplayed as a “-very, very low risk to the United States,” with mask-wearing actively discouraged. Full blown panic mode soon ensued with mandatory face-masking becoming the new American normal, followed by an arms race between rival pharmaceutical firms to develop novel vaccine products using mRNA technology. Once numerous vaccines were in full circulation, the CDC relaxed mask requirements for the vaxxed demographic before flip-flopping again to demand everyone batten down their face-holes. At the time of this writing, exasperated “experts” are currently talking about a “multimodal response” as new outbreaks of Covid spread through heavily vaccinated populations like wildfire. Old goalposts centered around the idea of vaccinating 70 % of the country to achieve herd immunity have gone completely out the window. In the words of John Michael Greer, “the official narrative has been veering around like a well-greased weathercock on a blustery day” which if anything is a gross understatement of the sheer contradictory chaos of the Centers for Disease Control over the last year and a half. The CDC is clearly beholden more to vested political interests and corporate influence than anything remotely approximating “science”.

Just as epidemiologist Don Francis discovered when he met with the captains of industry in blood products during the AIDS outbreak, it’s impossible to arrive at hard thresholds for when a systemic response to a growing concern is warranted. There is no fixed number, no set point, not even a purely arbitrary benchmark for when any given crisis merits an across the board response because each player involved is trying to maximize their own financial gains. In fact, the best way to predict how the United States responds during any widespread medical emergency is to just examine the commercial interests involved instead of looking at “the science”. At present, one has to openly wonder whether anything recommended by the “experts” has achieved even the slightest benefit for the average citizen. 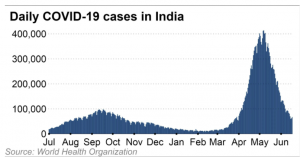 For comparison, here is a third world country with low vaccination rates and laughable government competence.

The null hypothesis in these situations has to take into account that the United States is generally abysmal at responding to pandemics. When a virus rages through America or threatens turn the country into an open-air morgue, it’s a fucking coin toss as to how government institutions will respond. The US scores a solid F- on the 1918 Flu Pandemic, the 1976 Flu Pandemic That Never Happened, the 1980s AIDS epidemic and now Covid 19. As the Delta variant tears through the populace, it’s worthwhile to look at the surge and decline of Covid in India. Despite a vaccination rate somewhere around 11 %, the dreaded delta coof sharply ebbed away without the intervention of experimental mRNA vaccine technology. And why wasn’t India able to utilize this miracle blessing from the choir of angels at Pfizer BioNTech and Moderna Inc? Because western pharmaceutical companies all demand that they are indemnified from any lawsuits resulting from the use of their products. At best, they’re justifiably concerned their vaccines will fail to perform (as seen in Israel and other places), and at worst the threat of unforeseen side-effects looms heavy on the horizon. Meanwhile back in America healthcare providers are literally fired for not getting vaccinated, most likely because their real role in medicine is to be a brand ambassador for Pfizer. Can’t very well have your top influencers refusing to “get the jab”, now can you? Given the visible trending in infection rates, it doesn’t make one much of a cynic to conclude that government policies and vaccinations amount to nothing more than a brief squirt of piss in the wind against nature’s viral hurricanes. Given this sobering, humbling conclusion, only one question remains:

Do you uncritically accept the policy recommendations of corrupt government officials responding to the corporate interests of modern snake-oil salesmen, or do you demand they prove that their interventions will have more than a marginal effect on outcomes?