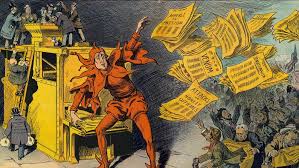 There’s a lot of naked emperors running around the United States, but our mendacious propaganda outlets are the most visibly nude royalty of them all. Despite a clear majority of the public believing that “Journalists and reporters are purposely trying to mislead people by saying things they know are false or gross exaggerations“, this has triggered no introspection from the parties responsible for eroding their own public trust. Believe me, I looked, only Matt Taibbi dared to place the blame squarely where it belongs. Predictably enough the news outlets treat widespread distrust as another failing of the public that requires remedial training to correct. In fact, if one were to put their finger on the ugliest trend in modern mass media and journalism it’s the tendency towards preachiness, editorialization, and correctitude as a default stance.

Rather than dispassionately and objectively report the news, journalists assume the tone of a patronizing schoolmarm, ever vigilant to preemptively “fact-check” and contextualize their stories lest the credulous buffoons in the audience get the wrong idea. Readers and viewers are not treated as adults capable of forming their own independent conclusions, they are lectured and harangued as if their own free thought was a problem to be aggressively managed. When covering politics and Covid 19 the news media constructs enormous guard-rails around the content of individual stories, putting themselves into the role of gatekeeper and overseer. This is not the traditional role of the news, which is ostensibly about providing accurate information and covering topics of interest to the public. Our media instead insults our own intelligence and openly discusses how best to “educate” us.

The blatant hypocrisy of media both in terms of coverage and tone is happening on a timetable too contracted for even our short attention spans to overlook. You cannot describe flaming riots as “mostly peaceful protests” for months on end and then suddenly decide a remarkably similar event at the US capitol constitutes a “terroristic and seditious attempted coup” without giving your entire audience whiplash. Nor can you use coded speech to conceal the ethnicity of black criminals while shrieking endlessly about the threat of “white supremacy” to anyone willing to listen. The media simultaneously claimed that Russian election interference was the gravest threat to American democracy and also that the US election of Joe Biden happened without the slightest blemish of voter fraud.

Not only does the news media frequently contradict itself on a daily basis, it also invents imaginary threats whole-cloth and then forgets about their existence a week later. Everything from weapons-of-mass-destruction in Iraq to a military coup/nuclear holocaust by Donald Trump has been floated out into the information echo-system by news media outlets desperately pretending not to be tabloid muckrakers. In the early 2000s there was insane hysteria about Muslim terror, now, in 2021, the hypervigilance is directed towards white men that may have voted for Donald Trump and might think they’re being lied to by the people who claim they are white supremacist terrorists.

What we have here is a system that manufactures its own illegitimacy and then prosecutes you for noticing it.

The forces of neoliberal capitalism have accelerated a trend towards marketing news as consumptive entertainment that explicitly agrees with your own ideology. It’s more efficient to specialize in one particular demographic instead of trying to market to a broad audience. As monopolistic technocracies continue to ideologically purge dissenting views from social media, the Twitter echochambers frequented by the modern American journalist get thicker walls. From this we arrive at a radicalized cloister unpossessed of the slightest self-awareness, leading to progressively more unhinged ideas totally out of step with the general public, like Kevin Roose suggesting that Joe Biden should appoint a “reality czar”. Normal people of relatively modest intelligence would balk at something with such obvious overtures to “The Ministry of Truth”, but when the Washington Post is out there trying to retroactively edit their own unfavorable coverage of a sitting US vice-president we have already crossed that particular Orwellian Rubicon. This is of course is to say nothing of the constant memory-holing of the endlessly shifting recommendations of how best to prevent the spread of Covid-19, which are not at all based in hard science and evolve so rapidly that even my liberal relatives have given up on abiding by them.

We also have to contend with the constant “fact-checking” by news agencies and social media apps preemptively censoring, deleting, offering correction, and putting advisory labels on posts by their own user base. Notice that the social media platform most popular with journalists also features the most patronizing management of its customers. To unashamedly use Twitter requires a self-abasement so thorough such a groveling toady simply can’t help but belittle the public at large. American journalists have themselves become furtive, obsequious rat-creatures plugged into a neurotic online network of sycophants and cowards.

Unfortunately, the post-modern condition means that despite losing all legitimacy, transforming the news into a consumable product conforming to the ideological tastes of a narrow band of influencers and corporations will remain profitable so long as it entertains. In my own life, I personally saw this play out during the closure of Pioneer Community Hospital. A medical facility that had been saving lives and providing jobs since the 1960s went under without so much as a peep from the national media. This should be a norm-breaking event, something to provoke outrage in an era when lack of access to healthcare is a major political issue. It created a local crisis so immediate I actually took up a part-time job working EMS in the county despite having moved on to full-time work for an online media business. This of course is what put Stuart, Virginia into international headlines. Not that an American hospital was shuttered and local EMS was straining to keep up, but that one of the men pitching in to help was on a “racist podcast”. “Racism” is what drives clicks, not informing the public on systemic problems that affect their very life expectancy, but pure sensationalism and manufactured outrage by a hidebound clique of Extremely Online lickspittles.

The saddest truth is that the transformation of the “news” into permanent yellow journalism doesn’t mean it goes away anytime soon. We’re going to see lurid headlines, blatant propaganda, and increasingly heavy-handed attempts to control “disinformation” by the biggest propagators of disinformation until the last American flag finally rots off the last rusting flagpole in this country.

Journalism’s decline just mirrors the general decline of America itself.