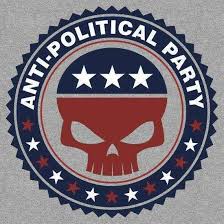 I find as I get older I become increasingly sensitized to hapless cretins misusing politically descriptive language. Words like “socialist”, “fascist”, “communist” and “Nazi” have very distinct meanings loaded with explicit policy positions, but in what loosely passes for modern discourse these terms have lost all signification. Hoi polloi commenters chuck these labels at “stuff they don’t like” with all the nuance of drunks in a snowball fight.

This goes far, far beyond simple misuse of a politically loaded noun, it speaks to a global problem with the relation of individuals to politics itself.

We now live in an age of all encompassing anti-politics, in which surrogate moral opinions and personal taste is substituted for political expression. This takes the form of a kind of political error theory or anti-realism, in which all political claims are false. Anyone paying close attention would have to conclude that yes, when people say they are trying to “save America from Communism” it has as much to do with reality as an earnest discussion of The Great Unicorn Heresy on the planet Neptune. They are not merely wrong, they are incapable of producing a statement coherent enough to be falsified in the first place.

The destruction of political language slots rather neatly into Jean Baudrillard’s thesis on simulacra. Clearly, political terminology now exists in the 3rd order (or confusingly the 3rd order and 4th stage) in which these terms either have no relation whatsoever to reality or only the most tenuous echo of a former reality, one misremembered and decontextualized. Worse, these false symbols are transhistorically superimposed over the past itself, redefining historical figures and political movements under the scrutiny of a modern lens which itself is predicated on subjective moral impulses.

As a consequence, no one has the language to properly articulate or conceptualize their political desires.

Depending on where an individual sits within the false political dichotomy, their energy will be siphoned off and their understanding frustrated by various mechanisms, some general, some specific. The first line of defense is the “thought terminating cliche”, and it does exactly as advertised: It interrupts critical thought with a simple slogan that slams the door on further inquiry. Don’t like abortion? You just want to control women. Support unions? You’re a communist. This is the circuit breaker of anti-politics.

A general tendency towards radical individualism has permeated the depths of both “poles” of this fake spectrum. For the right, it manifests as a stubborn commitment to “personal freedom” in the abstract that works out as employment precarity and total loss of communal social capital in the real world. Conservatism and libertarian beliefs both play off a deep pessimism about utilizing the power of the state to improve individual lives, resulting in a refusal to enact political will becoming a “political goal” in of itself. Conservatives essentially formulate really great arguments for disarming oneself and refusing to fight tenaciously for principles that actually matter; this is an ideology that venerates being anti-political. In their own imaginations, these conservative types seem to fancy themselves as brave frontiersmen that don’t need no government.

For the left, activist politics in which personal moral agendas are confused with political causes predominate. As Christopher Lasch notes in “Culture of Narcissism”, since the 1970s leftists have increasingly seen their actions as a form of self-care or therapy. It’s about a journey of self-discovery more than the achievement of tangible political goals. Rather than acknowledge that political labels are inevitably the product of power relations and too often represent an outright appropriation of territory by the hegemonic forces of capitalism, the modern “leftist” drapes himself with corporate produced emojis and hashtags like a NASCAR driver collecting sponsors on the side of his race car. Mark Fisher’s excellent if somewhat awkwardly titled “Exiting The Vampire’s Castle” describes a disarticulation of class, a process of inversion in which bringing up class dynamics itself is perceived as a direct assault on the importance of race and gender identity. This leads us to bizarre scenarios in which privileged, bourgois “woke” leftists get to cancel working class people for Tweets they made as teenagers, a clear brutalization of a lower member of society by an elite. Structural critique of institutions is abandoned in favor of witch-hunting individuals and getting the nastiest of satisfactions, the hit of dopamine from being the first to permanently destroy someone’s life for saying a naughty word on the internet. This is an excessively punitive, cruel culture of sadomachistic haemonculi.

Obviously, the politicians held out for these politically comatose lumpenproles are themselves farcical beyond belief. We have the absurd caricature of a “populist” in the body of a New York billionaire, someone closer to a Crassus without the military victories than a man of the people. Yet this ridiculously bloated hyper-reality star was able to exploit the schizophrenic anti-politics of modern America to gain the earnest support of the rural white commoners en masse during 2016. While Dan Crenshaw might want to fancy Alexandria Ocasio-Cortez as a would-be socialist dictator, the reality is even a “far left radical communist” like AOC is just another careerist politician that wouldn’t even apply pressure for a vote on Medicare For All.

This then is the Age of Anti-Politics, the great and final dissolution of all revolutionary potential and grassroots political will by the lurid neon hyper-reality of modern corporate managerialism.

Recognizing the problem is the first step towards solving it.