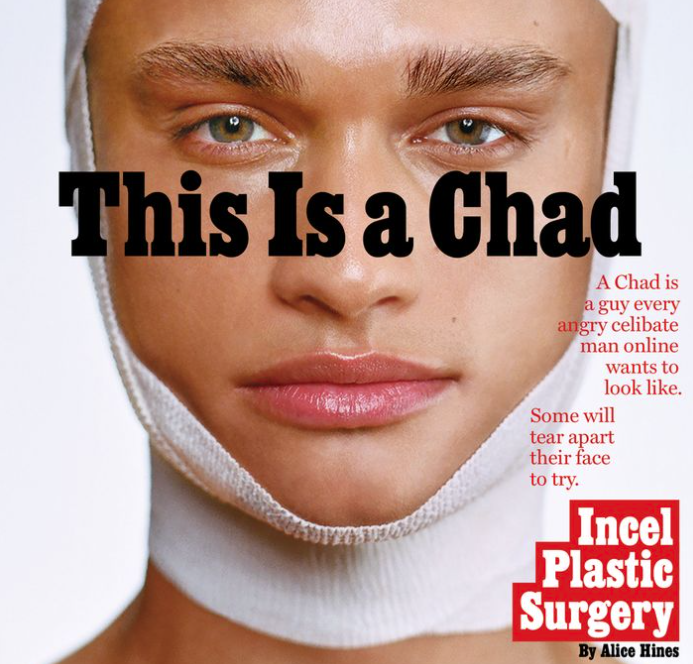 “Men and women acknowledged each other’s shortcomings without making them the basis of a comprehensive indictment. Partly because they found more satisfaction than is currently available in casual relationships with their own sex, they did not have to raise friendship itself into a political program, an ideological alternative to love. An easygoing, everyday contempt for the weaknesses of the other sex, institutionalized as folk wisdom concerning the emotional incompetence of men or the brainlessness of women, kept sexual enmity within bounds and prevented it from becoming an obsession.”

Incels are quite the topic lately both in the mainstream mass media propaganda apparatus and in online circles. Simply defined, an “incel” is an involuntary celibate. It’s an interesting coinage, particularly when one considers that “celibate” refers to both no marriage and by extension no sex in the traditional definition, ostensibly for religious reasons. Whether incels are more disturbed by the lack of marriage or the lack of sex seems to be up for debate. While the MSM is quite happy to just turn them into another boogeyman like “white nationalist/white supremacist/white person”, the truth is a lot more complicated.

Firstly, no one can deny that the preconditions are ripe for growing a bumper crop of disgruntled single men (and women for that matter) given just how many people are not in relationships right now. Over half of people under 35 are unmarried in the United States, sexual activity itself is in steep decline, and people are losing their virginity later in life. The general trend is towards less relationships, less sex, and less social interaction in general, as if the entire first world is experiencing some kind of major social dysfunction. We have the perfect storm for a lot of angry, isolated, lonely people to use high-speed internet connections to vent about their frustrated existence in this rotten Hellscape of a modern world, so it’s only natural that colonies of them would arise online. Needless to say, the establishment itself correctly sees the mere existence of these malcontents as a condemnation of the status quo and lambasts them as heretical deviants. Notice the discrepancy between how radical feminists and incels are portrayed by the media.

For more relatively “normal” men, inceldom is seen as an embarrassment, as something roughly akin to interpersonal impotence. Historically most guys can recall feeling desperate and lonely at some point in their lives and view this as a natural part of growing up. This engenders contempt and lack of sympathy as a natural reaction to the involuntary celibate, but as if this wasn’t bad enough, incels have constructed a certain worldview that offends the sensibilities of their more well-adjusted peers.

Incels apply an extremely mechanistic understanding to women and human relationships. I think they do this due to a combination of three factors; the bias towards transactional materialism perpetuated by mainstream consumerist tendencies, male bias towards systemizing in general, and a dash of genuine autism, which is itself just extreme male-brained behavior. Armed with an esoteric vocabulary of terms borrowed from the Pick-Up Artist “community”, incels view women as commodities or resources which can be evaluated using a 1-10 scale of appearance and a checklist of other physical facts like virginity or “body count”. This is a very deflationary, reductionist, and dehumanizing approach to the other gender, but in their defense it’s the exact sort of thing you’d expect from disenfranchised men that grew up in a world that has successfully commodified every single item and experience in it. It certainly doesn’t help that women themselves are openly praising the existence of sex work and the commercialization of their own bodies as just another consumer product available for enjoyment as a reoccurring online subscription. When incels proclaim they have a “right” to a virginal attractive woman, they are really just echoing an old Enlightenment era liberal conceit first expressed by Marquis de Sade’s demand that women “submit to our pleasure” and culminating in the indignant rage of transexuals that men are just not interested in “transwomen”. Society “owes” you access to some other person as a product to be consumed, the individual is stripped down to a material being only valuable in material terms.

The proposed remedy by incels is either predicated on some kind of violent revolution (the beta uprising) that expropriates women by force or a technocratic bureaucracy that assigns marriage partners. While the first is clearly just a revenge fantasy, the second speaks to the instrumentalism and soulless technical solutions so beloved under neoliberal capitalism. Despite bemoaning the degeneracy of our modern time, the incel himself has an inherently degenerate view of women, whom he reduces to mere bodies for his satisfaction. He views this as a simple resource allocation problem, when actual human relationships are far messier and completely defy these reductionist attempts to describe them. He fails to really account for the deeper spiritual and social crisis of the modern world, fixating instead on femoid outrage porn that provides anecdotal confirmation of his theories that all women are hypergamous whores obsessed with money and status.

The political problem of the incel is that while they are indeed a product of our late stage capitalist decadence and disintegration, their demands cannot be easily met and are so often anchored in consumerist narcissism that they just alienate and disgust everyone around them. This is exacerbated by the online “communities” themselves which just become cloistered mind-traps full of obtuse language and disaffected thinking. Much like the radical feminists, they are too ideological with their personal frustrations and their crass hatred of the opposite gender to allow for any productive discussion. In an ideal world, there would be healthy social norms that would encourage everyone to find a fulfilling relationship, but we are essentially trying to rebuild those norms from scratch in a burning wasteland. Should we even succeed in mere survival, positive change in restructuring society is likely many decades off.

Ultimately, the Incel Question is not ours to answer.