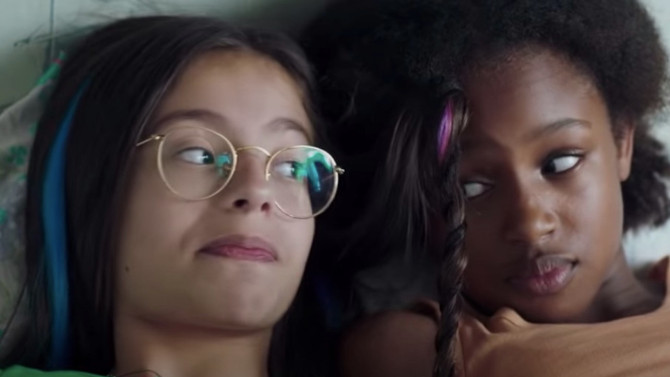 Last night after collecting my notes on Baudrillard I sat down with my wife and watched “Cuties”. Reading through a French critique of hyper-reality and then watching a film that’s emblematic of those problems identified by post-modernists was itself a bit surreal. Bonus points to those of you that know a veritable who’s who of French intellectuals actually signed a petition in 1977 against age of consent laws themselves.

As for the plot of the film, it’s a self-insert by a Senegalese woman about her experiences as a Muslim immigrant to France. France is painted as a multicultural Hellhole, a Mos Eisley Cantina where the only blue-eyed white girl is a minor character with the fewest lines of dialogue. The film tries to draw some moral equivalence between child marriage in traditional Islam and exploitative hyper-sexualization of young girls in the modern social media landscape. Between the two poles of repressive Muslim culture and sexual objectification of children in modernity, the final resolution is to just become a deracinated, Strong, Independent Woman of the sort that grows up to direct movies for Jewish sex traffickers. Functioning as sort of an after-school special for the status quo of globalism, this film is essentially just an apologia for being another Neopeasant consumer barely mature enough to realize extremely blatant sexual exploitation is bad.

When the film tries for some ironic self-awareness by including a greasy looking white pedophile caricature who looks on appreciatively at a scantily clad 11 year old, it frames it in the familiar racial trope of the white male child-molester. Curiously this movie seems perfectly content to wallow in the anxieties and self-objectification of a young Muslim coming to the West but doesn’t actually approach a more timely subject like organized sex-trafficking by well-connected internationalist Jews. Why is that? Why produce a film engaged in this navel-gazing narcissism instead of addressing a very real systemic issue?

I think we all know the answer to that one.

Whitney Webb: The Real Reason Why Blackstone Is Courting The Pentagon