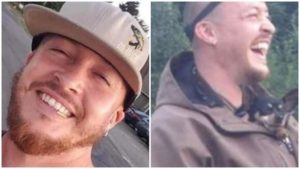 The National Justice Party is saddened and angered by the politically motivated killing of Trump-supporter Aaron Danielson, also known as Jay Bishop, allegedly at the hands of “antifa” rioter Michael Forest Reinoehl.

The shooting happened on the 94th consecutive day of anti-White extremist rioting in Portland, a city whose streets bear more resemblance to interwar Germany than that of a functional first world country in the 21st century.

Shortly after news broke that Danielson had passed, a large crowd of anarchists gathered in the street to celebrate the killing of a “Nazi” – a term left-wing extremists and their supporters in the media use to rationalize assaulting or executing random White men in the street.

“He was a f—ing Nazi! Our community held its own.”

Antifa & BLM in Portland celebrate the homicide of a purported Trump supporter who was affiliated with Patriot Prayer, a Portland-area conservative group. pic.twitter.com/xjIWk0KHN2

The brazenness and inhumanity of these anarchists was further put on display when they later ironically played military taps to gloat about killing a “fascist” while burning the American flag.

Antifa burn a US flag to celebrate the death of the man shot in downtown Portland. They call him a “fascist” despite not knowing who he is. #PortlandRiots pic.twitter.com/3CjdcWDl1S

The moral support provided to these political lunatics by Mayor Ted Wheeler and George Soros-funded District Attorney Mike Schmidt carries as much responsibility for the anti-White attack as the alleged gunman does. Rather than promising to restore order in the streets and crackdown on violent left-wing extremists, these two held a press conference affirming their support for the “righteous” rioters and blamed Trump and his supporters for the killing.

The escalation of racially motivated violence against Whites in the name of “anti-racism” is a product of both the media granting a moral carte blanche to left-wing rioters, and the government using selective prosecution in order to terrorize nationalists and populists into submission. Often times those targeted are pro-Trump conservatives and patriots that play no active role in the pro-White movement, yet they are nonetheless targeted racially, as the language of their attackers affirms. In today’s United States, holding or expressing a “politically incorrect” opinion of any stripe means black-clad communist paramilitary organizations are entitled to intimidate, threaten, beat and kill you.

The Republican Party has played its own role in aiding left-wing extremists by abandoning and condemning groups that engage in community self-defense, like the Proud Boys or Patriot Prayer. Most conservatives are also refusing to provide a full-throated defense of Kyle Rittenhouse, the teenager who practiced the textbook definition of self-defense in stopping a frenzied mob of violent criminals. Some, such as Jewish neoconservative Bill Kristol expressed open support for anarchist rioters and characterized Rittenhouse as a murderer, while Jewish Fox News correspondent Chris Wallace has condemned clear-cut self-defense as “vigilantism.”

In spite of the cold shoulder from elites, model citizen Rittenhouse’s actions have resonated strongly with ordinary Americans tired of living in fear. Media narratives seeking to demonize him and conservative betrayals are being tuned out by the public.   The large and positive grassroots reaction in favor of Rittenhouse has taken “antifa” members by surprise, leaving them feeling bitter, paranoid and isolated. In the grip of this hysterical rage they have moved on from “punching Nazis” to opening gunfire on crowds of Trump supporters, as happened earlier today in Los Angeles.

While the threshold of popular tolerance for the murder and carnage has been met, elites controlling both the Democrats and Republicans appear unwilling to put a stop to this madness.

The FBI could quickly crush the anarchist groups causing the mayhem if they wanted to, but they do not. Rather than upholding law and order, the agency has in recent years played the role of a political secret police force. Most of their resources are spent harassing and manufacturing phony evidence against law-abiding and patriotic dissidents in support of the “far-right” and “white supremacist terrorist” moral panic invented by the mass media and the Anti-Defamation League. Federal law enforcement’s naked political prejudices function as air support for enemies of normal people. This perverse relationship between the media, law enforcement, politicians and the ADL is how “antifa” became emboldened enough to commit murder and then boast about it.

The National Justice Party stands for self-defense, freedom of speech and the right for citizens and communities to live in peace, free of political intimidation and terror. As the nation spirals into political and racial civil war, it is vital to keep solidarity and fortitude among all those who share these values in the face of the ongoing red-and-black terror.

Kyle Rittenhouse is an American Hero