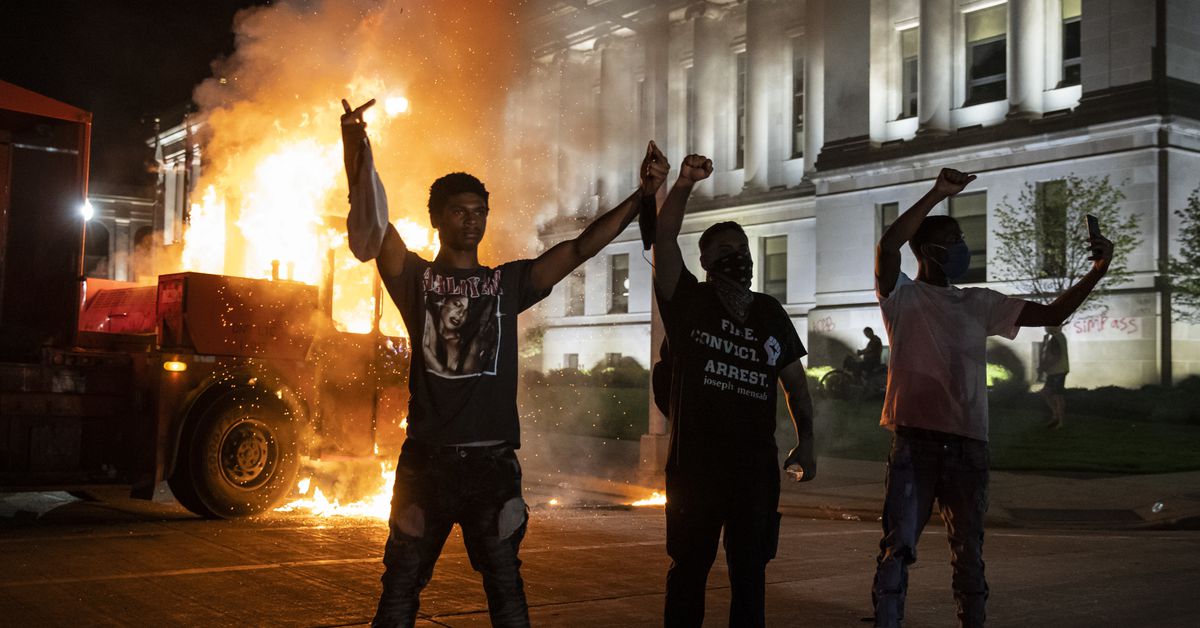 NJP Statement On the Violence in Kenosha, Wisconsin

Kenosha, Wisconsin has been the latest scene in the anarchist and black lives matter violence that has blanketed our country over the last few months. The excuse this time? Police were responding to a domestic violence call involving a black man named Jacob Blake. Blake had a warrant issued against him in July for domestic violence and sexual assault. In the course of the encounter, Blake refused to obey orders from Police, walked away, opened his car door and appeared to reach for something. At that point he was shot.

After the shooting, violence peaked once again in Kenosha with scenes of anarchist and black lives matter protesters attacking citizens, police and businesses around the city. A car dealership was torched, a fitting statement on the state of Kenosha, once a prosperous auto-manufacturing city. Like most small cities in the rust belt Kenosha has fallen victim to the de-industrialization of America. The once thriving community has been hollowed out and is now riddled with black ghettos and anarchist squatters. In one notable incident broadcast to social media, an anarchist terrorist is seen threatening police with a long rifle before opening fire on a police armored vehicle. Surprisingly, or perhaps not so surprisingly in America today, police retreat from the scene without returning fire, engaging the suspect, or even stopping to see if anyone was hurt by the gunfire.

I am not going to re-litigate the circumstances of Jacob Blake’s shooting. That will be done endlessly on TV and computer screens over the next few days, with everyone claiming to be an expert on the law and police procedure. Leading the way in this respect was Wisconsin Governor Tony Evers who, before learning any facts in the case, had this to say on twitter:

While we do not have all of the details yet, what we know for certain is that he is not the first Black man or person to have been shot or injured or mercilessly killed at the hands of individuals in law enforcement in our state or our country.

This is typical of the political class, eager to fit the narrative on any such incident into the approved consensus view of White on black violence and the desperate need to teach Whites to be less racist. Interestingly, Evers had nothing at all to say about the anarchists wantonly shooting at police in the streets. The GOP only issued limp-wristed condemnations of Evers for “rushing to judgement” without articulating any forthright defense of the police involved, or explaining the reality of the circumstances. This is because they too will at some point be compelled to come out and publicly show deference to black lives matter and tell us how deeply, deeply moved they were by the shooting of the sainted Jacob Blake.

White Americans are frankly sick of it. We are tired of hearing lectures from political and financial elites about how racist we are, how we must have empathy and compassion for criminals, rioters and sex offenders. The only thing Whites want to hear from those in the political class is that they will restore order and put a stop to the violence and chaos. But no one, particularly not the GOP, wants to make that promise. The GOP hopes to placate their voters with outrage porn over property destruction, hypocritical paeans to individualism and racial equality, and thin promises that if you vote for them in November they will do something about it.

But they won’t. Why do they need to wait for November? Instead of showing people images of anarchist riots on twitter, why not simply stop the riots? Donald Trump is in power now. He has broad power to crack down on this sort of terroristic violence, as we can see by the zeal with which his Justice Department pursues peaceful White protesters, many of them his own supporters. If you can gin up a case against peaceful, pro-White demonstrators, surely you can do something in the face of open, organized and widespread anarchist violence.

Trump won’t do anything because he can’t and he doesn’t want to. His donors, who are largely from the same class and background and share the same social views as large Democratic donors, are on the side of black lives matter. Rather than speak up for Whites and our concerns, the President and his party focus instead on attacking the Democrats for being the “real racists.” This dishonest rhetorical device, conceived by Dinesh D’Souza to help the GOP avoid accidentally slipping up and racially advocating for Whites, was once thought to be a clever retort. It is now simply annoying and insulting to the people that actually vote for Republicans.

We don’t need to hear from another politician about how much they support black lives matter, or what a great and wonderful person the latest black criminal shot by police was. What about the great and wonderful people that manage to not get shot by cops, or get involved in domestic violence, or commit sexual assault? What about the great and wonderful people that have fallen victim to anarchist violence over the last several months? No heartfelt speeches for them. Because the political class and their donors simply are not on the side of White Americans. They welcome the violence and the unrest as just punishment for a population that they despise, and are eager to exploit each and every police encounter with blacks in order to fan the flames of anti-White hatred and provoke more such incidents.

This is why the National Justice party was formed. America needs an outlet that is willing to talk straight about the real issues and advocate for Whites unashamedly in the public space. You will never hear anyone in the political class openly side with Whites, or even talk about Whites as a legitimate group. Despite the fact that it would be wildly popular for Trump to come out and simply crush these rioters, he will not do it. We are sick of being lied to, patronized and ultimately ignored. These perspectives need to be articulated and spoken about to Whites all over this country, and no one in the GOP is willing to do it. A truly independent pro-White voice must become part of the political conversation in America or the circumstances that lead to violence, rioting and unrest will continue unabated.

Kyle Rittenhouse is an American Hero