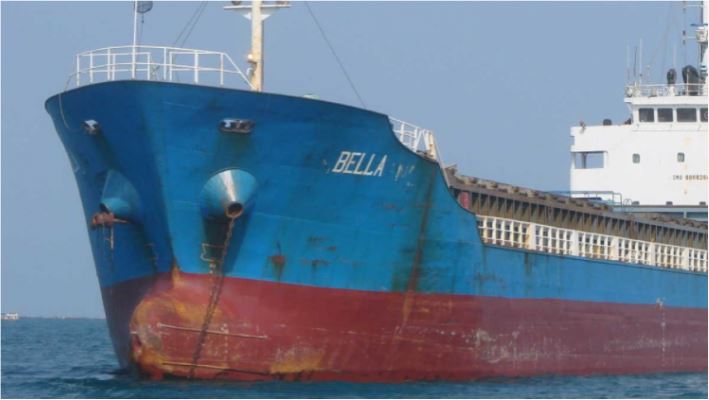 The U.S. Justice Department has confirmed a Wall Street Journal report that four oil tankers carrying fuel from Iran have been seized for violations of sanctions against both countries. 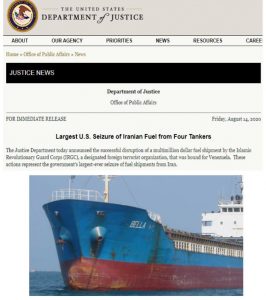 The DOJ’s statement this morning reads, in part:

“The government announced today that it has successfully executed the seizure order and confiscated the cargo from all four vessels, totaling approximately 1.116 million barrels of petroleum. With the assistance of foreign partners, this seized property is now in U.S. custody.”

The DOJ confirmed the seizure took place before the Iranian seizure of a Liberian oil tanker near the Strait of Hormuz earlier this week. The statement asserts the Iranian seizure was part of an effort to recover the oil seized by the U.S. that ultimately failed.

If the seizures of the ships and oil are upheld by a U.S. court, they will likely be sold. The proceeds, according to the DOJ, will go to the Victims of State Sponsored Terrorism Fund.

The Iranian government has not publicly acknowledged the seizures. Last month, an Iranian political observer wrote an analysis of how the Islamic Republic might respond to this exact situation for the Soros- and Koch Brothers-funded Quincy Institute for Responsible Statecraft.

“First, the legal and diplomatic response: This is mostly voiced by experts inside Iran who are in favor of filing a complaint with the international legal community as well as the United Nations and begin diplomatic consultations with U.S. partners for the release of its tankers in such an event. This option would be the least dangerous and at the same time probably the most fruitless. The Trump administration has already shown that it does not care much about international law in the process of Iran’s appeal to The Hague tribunal and, of course, its withdrawal from the Joint Comprehensive Plan of Action, prioritizing U.S. domestic law — often, in fact national or Trump’s personal interests — over international laws and regulations.

“Second, retaliation: Another option preferred by hardliners inside Iran is retaliation; namely, an action similar to the seizure of the British oil tanker Stena Impero last year in retaliation for the seizure of the Iranian tanker Grace 1, or Adrian Darya. This option is certainly risky, and perhaps as the New York Times wrote, Trump is basically looking for such an adventure to pave the way for a military confrontation.

“Third, Reducing nuclear commitments: Another option is Iran’s nuclear program, in which the country can take a sensitive step in Western security thinking, such as increasing enrichment levels to more than 20 percent or limiting access by IAEA inspectors. To this end, Deputy Chairman of the National Security Commission of Parliament, Abbas Moghtadaei, has announced discussions on an urgent bill to stop the voluntary implementation of the Additional Protocol by Iran. Given the U.S. policy of maximum pressure and acts of sabotage in Iran in recent weeks, which are said to have been carried out by Israel — as well as the practical passivity of Europeans in supporting the JCPOA — supporters of a withdrawal from the JCPOA and even the Nuclear Non-Proliferation Treaty are increasing every day among some of Iran’s elites and the public.

“Iran’s non-response to these acts of sabotage may be taken to indicate an equal lack of will to respond to the probable seizure of its oil tankers. But there is an important difference between the two situations. If the tankers are seized, U.S. culpability will be clear, and Iran will have to respond in some way, as it did in the case of Major General Qassem Soleimani’s assassination. Israel, on the other hand, has not accepted responsibility for the acts of sabotage, and Iran may respond proportionally to Israel using similarly underhanded methods in the coming weeks.

“Fourth, disruption in the Strait of Hormuz: Another option could be the disruption of maritime traffic in the Strait of Hormuz by increasing military movements and making the international strait insecure. In fact, unlike the second option, Iran would not be taking direct action against the U.S. here. But it would try to force the U.S. to reconsider its actions with a show of power and maneuvers as well as putting pressure on countries benefitting from commerce via the Strait of Hormuz. As Iran’s oil sales have dropped to a minimum, the importance of this international waterway has diminished for Iran.

“Fifth, proxy forces in the region: Another option that may be more visible is the use of proxy forces supporting Iran in the region, in particular, al-Hashd al-Shaabi Popular Mobilization Forces in Iraq and Ansarullah in Yemen to impose costs on the U.S. and its allies. Nevertheless, this option has its own limitations and conditions. The extent of these costs and its success during the prime ministership of Mustafa Al-Kadhimi in Iraq is debatable.”

Bayat also wrote that Iran would not remain silent about the seizure of the oil tankers. He noted the Iranian parliament is now made up of a majority of “hardliners” that have put “moderates” like President Hassan Rouhani and Foreign Minister Javad Zarif “in their weakest position in seven years.”

Ultimately, he concluded, a crisis breaking out between the U.S. and Iran was “very probable.”