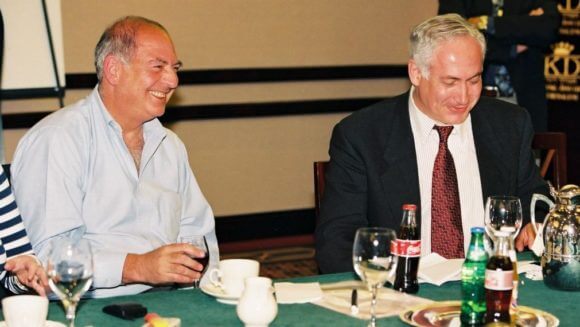 Former Israeli prime minister Ehud Barak published an op-ed in the New York Times, saying Israel needs to be saved from Benjamin Netanyahu, and spoke at the Saban Forum in Washington, arguing that Netanyahu, not Iran, poses an “existential threat” to Israel because he is slowly annexing the West Bank and undermining Israel’s “moral high ground” in the “advanced” world.

Netanyahu has solidified his power by touching fascistic chords in the Israeli public, Barak said. “Any ultra-national movement– I don’t want to use the word fascist” heightens the awareness of “enemies” who can never be reconciled, Barak said. The result is identity values: “[Israeli Jews] want to belong to a group, they respect authority, they hold certain things sacred.”

As long as we agree that these are the filters that should be used, the right-wing will be forever in power.

The left has to change the identity questions into substantive political questions about the danger to Israel’s existence, because Israelis actually seek separation from Palestinians.

I can tell you, 70 percent of Israelis believes in two-state solution. Eighty percent believe in separation. I say, why, what’s the difference? There is a difference. Israel never wants to be suckers. So two-state solution sounds as if you are yielding to a demand or a right of the Palestinians. Separation is something more neutral. And 85 percent support divorce.

(Ali Abunimah long ago said that this Israeli Jewish desire for “separation” was simply apartheid by another name.)

Netanyahu has set in motion a dangerous trend, Barak continued: Israel is gaining a reputation for obstinacy, and thereby is losing the moral high ground with “advanced” western societies, and with Jewish communities in particular. Forget about the 160 “photo-op” countries.

What I see is a major problem for Israel that we lost this instinct that Zionism had from day one to always hold the moral ground… in the minds of your own people, in order to hold them united; in the minds of the Jewish communities in the world; in the minds of friends in the advanced world.

After all, Western Europe, North American, Australia, New Zealand– that’s our reference group. The rest of the 160 nations where we do a lot of mileage, we make visit, they visit, and it’s great for photo ops, the real core of our identity are those countries and we should make sure that we hold the moral high ground there.

This has created a crisis among Israel supporters:

When you look at the crisis that we have now with Americans, especially young generation and with many people who were– devoted supporters of Israel for decades in their own nations, you see that the real underlying cause, that we lost this instinct. The instinct to always find a way to make sure that if something is rejected it will be genuinely understood by objective observers and friends all around the world as being rejected because of the insistent obstination or whatever on the other side. Not because Israel was kind of framing it in a way that does not allow you to fly.

Dennis Ross, the US mediator (who has said that U.S. Jews must side with Israel), expressed a real fear about what Israel has become.

“You said 85 percent of the Israeli public would prefer divorce. And yet, there seems to be no real debate within Israel over the danger that you’re describing, so how do you explain that?”

Barak said that the left had failed to tear the masks off the right wing agenda for one state and show how it is destroying Israeli security and democracy– creating a one-state solution outcome that will be non-Jewish, non-democratic, and insecure.

Dani Dayan, the Israeli consul general, objected that Barak himself was responsible for the Israeli attitudes toward Palestinians.

I think that the simple answer to the question of Mr. Ross is that Israelis overwhelmingly do not believe that the Palestinians are ready to have peace with Israel and actually, you are the first person that rightfully taught that to the Israelis.

Dayan referred to Barak’s explanation of the failure of Camp David talks in 2000, that Palestinians are not a partner for peace (what Avi Shlaim calls a “tragic mistake” that delivered the Israeli public to the right wing).

As for Barak’s peace plan, he offered it in the pages of the New York Times and at the Saban Forum: Israel gets to keep Jewish neighborhoods of East Jerusalem and the settlement blocs, comprising 80 percent of the settlers, and leaving 100,000 settlers to be removed from “isolated settlements” in the West Bank. The Palestinians are compensated with “land swaps.” And Israel keeps its army in the West Bank. This is a recipe for a non-viable rump state, and, as Scott Roth says, it is Israelis setting the terms of negotiations ahead of time, and leaving out Gaza, refugees, and any notion of justice.