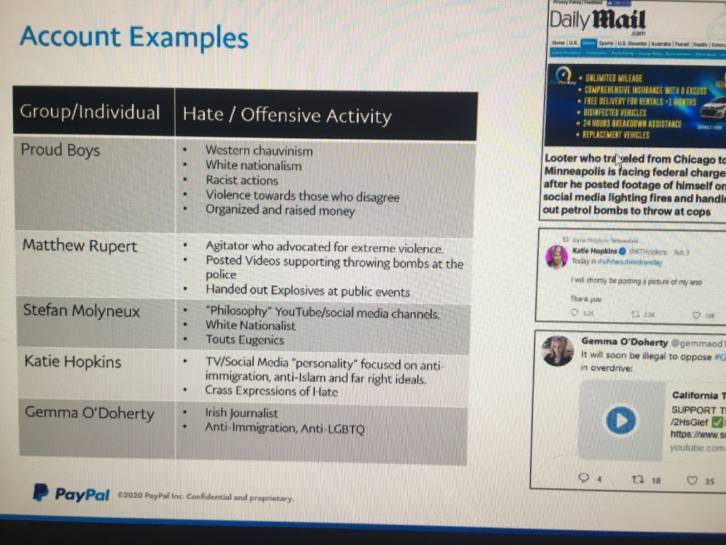 In the above slide, Paypal lists targets for censorship. Some noteworthy categories are “White Advocacy,” something vaguely described as “Hate Event Involvement” (suggesting they target individuals, not actions on their platform), “Prejudiced News/Commentary,” Holocaust “denial,” and even views critical of mass immigration.

The majority of Americans are guilty of at least one of these thought-crimes, which makes one wonder who can even use this service.

Some categories discriminate against customers based on race (“white advocacy”), while gray areas abound regarding what exactly constitutes prejudiced news, hate or religious intolerance.

So then what entity decides who gets access to online money transfers and who doesn’t?

According to another slide, this work is deferred to the Jewish organization the Anti-Defamation League, a group funded by the Democracy Alliance called Color of Change, the FBI’s Civil Rights Division, Scotland Yard and others.

Government and non-governmental organizations are both presented as “external partners” helping make decisions on what political views and personalities are allowed.

The ADL and the FBI have been very aggressively deplatforming dissidents.

According to another training slide,1800 accounts belonging to individuals, non-profits and businesses in the last year have been eliminated for political reasons using guidelines provided by their “partners.”

65% were for what they categorize as white nationalist activity, while the next most censored group is people and organizations who advocate for immigration restrictions. A person cannot support Donald Trump’s winning issue from his 2016 campaign and still keep their Paypal, in other words. There is even a category for “prejudiced academic work.”

The company goes on to give specific examples to train censors in spotting ideas and individuals that must be silenced.

Most of the individuals and groups mentioned are not particularly radical, much less violent or dangerous.

The only left-wing extremist on this list is Matthew Rupert, who also happens to be the only one who engaged in illegal activity. Rupert is an anarchist criminal who went to a Black Lives Matter protest and handed out explosives for people to use in terrorist acts.

The way everyone except for Rupert is characterized on this chart shows the power of extremely prejudiced sources, like the Anti-Defamation League. The ADL is an espionage and influence organization that operates on behalf of the state of Israel.

The president and CEO of Paypal, Dan Schulman, is himself Jewish and eager to work with the ADL.

China and the Chinese Communist Party — who conservatives sometimes like to blame for the censorship — is not mentioned anywhere on these slides.

Trump’s executive order on tech censorship has had no effect whatsoever even as a deterrent. Silicon Valley and various Jewish groups have responded to it by doubling down and intensifying their attempts to control what we can see, say, read and do.