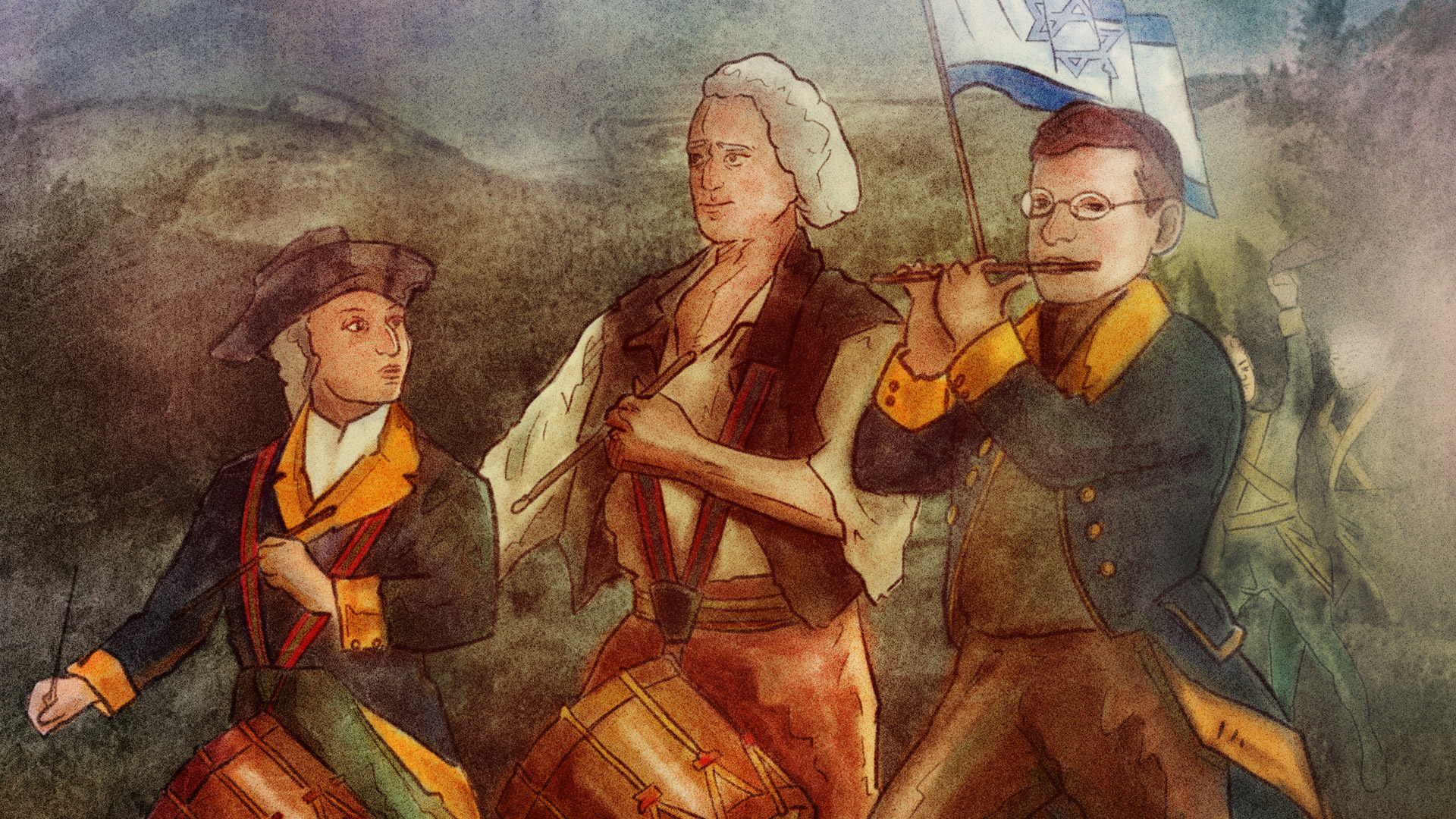 Two Israeli Jews, Yoram Hazony and Ofir Haivry, have written a piece on The American Conservative entitled “American Nationalists, Alexander Hamilton’s Federalist Party provides a blueprint for conservatives today.” The 13,000+ word essay is a tedious undertaking for anyone casually acquainted with American history. Replete with half-truths, glaring omissions, as well as glib, ham-fisted projections of contemporary politics onto America’s founding, it is worth a laugh or two, but not much more. On the other hand, for the pseudo intellectual midwit target audience for the piece, the impact is much more insidious.

They deploy the word “nationalist” 125 times, “nationalists” 42 times, and “nationalism” 21 times throughout the essay. You may find yourself re-reading certain paragraphs thunderstruck at how ridiculous it sounds, but for midwits, this may be all the convincing they need.

Most are already familiar with Yoram Hazony, an out-of-nowhere Israeli Jew meddling in American political discourse and propping up a kosher version of American Nationalism. Co-author Ofir Haivry is the Vice President of The Theodore Herzl Institute, one of the founders, along with Yoram Hazony, of the Shalem Center, a zionist research institute, and a member of Israel’s Council on Higher Education. Apparently, too, esteemed scholars of American history.

Hazony and Haivry’s obtrusive and transparently foreign interpretation of America’s founding period seeks to further confuse those still clinging to a past that did not exist in the way they’ve either imagined or about which they have been propagandized, derailing further critical analysis, and erecting yet another false dichotomy intended for whites to become even more deeply entrenched. Working from this false premise, The pair go even further by projecting their own Jewish worldview onto features of the story they wish to amplify, while suppressing and omitting those they find inconvenient.

The Hazony/Haivry version of American history is made for pseuds. If you’ve been paying close attention to what we’ve been saying in our deep-dives on America’s founding, here, here, and here, as well as the phenomenon of contemporary fake nationalism – in which Hazony is deeply invested – you would immediately see the truths that Hazony is intentionally omitting and other foundational elements of American history about which he is intentionally being misleading.

So what is the Israeli version of America’s founding exactly?

According to the duo, and without any evidence, Hamilton, raised as a Jew in the Caribbean, and the Federalists were devout ethno-nationalists who believed American should only be comprised of those of British admixture (feel even deeper layers of D&C coming on hot and heavy?) and who believed government should be deeply intertwined with Puritanism. Viewed from a perspective not intended to be conveyed by Hazony and Haivry, this makes perfect sense, as Puritans and Jews have a long and storied history of working together against other whites.

Jefferson and the Democratic-Republicans were anti-nationalist open borders globalists who wanted to disestablish religion altogether and who believed America should just be comprised of rugged individuals with no government. Again, citation needed.

However, as we pointed out in our recent deep-dive into the life and political context of Thomas Jefferson, after Jews had succeeded in securing  a National Bank and federal court system by influencing Federalist policies under Washington and Adams, they shifted their support to Democratic-Republicans, without which Jefferson would not have been president. They did so primarily because of Jefferson’s belief in religious freedom. Curiously, the phrases “religious freedom”, “religious liberty”, and “freedom of religion” do not appear anywhere in the 13,000+ word essay, a concept for which Jefferson is most famously known.

Boil it all down and you get Alexander Hamilton, hard-core revolutionary American (Ethno) Nationalist vs. Thomas Jefferson, open borders globalist. Nationalist Federalism good. Anti-Nationalist Anti-Federalism bad. On. Off. Off. On. 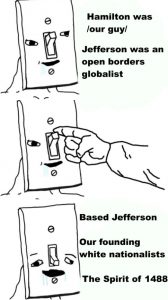 Hazony and Haivry know some will readily adopt and regurgitate his twisted outsider’s perspective on American history. These are the true dupes, though I suspect given their success in other endeavors to create a kosher American Nationalism, most will not fall for this either.

They also know others will simply take the opposite position because it’s just how light switch brains operate and it takes a little practice to pull oneself out of Finkel Think, a now 60 year old strategy deployed by the late GOP political consultant Arthur Finkelstein to pit white voters against one another in a menagerie of false dialectics.

We had a feeling this was coming the moment we delved into the history of America’s founding and began to dispassionately reexamine our own origin story. By checking our priors at the door we are able to better understand what led us to where we are today, and ultimately, chart a course better aligned to the outcomes of this truth-based, objective analysis.

Our approach to this subject matter has been honest and unapologetic. In so doing, we’ve cast aside decades of propagandized histrionics about what we thought we were – a nation founded by us and for us, vested in the national interest of the people who built what was once a great nation from raw, untamed wilderness. What we found instead were earlier, and though seemingly primitive, equally repressive systems of manipulative financial control that we find today, with great disparity between those who built the nation and who tamed the wilderness and those who ruled over it.This has been difficult for many of us to hear and it has not been without angst and frustration, but once accepted, it has been cathartic, freeing us to look to the future instead of the past.

James and I reacted to this latest round of Israeli agitprop in detail on FTN 321: The Spirit of 5536, in which we convey that the very best response to tricks like these is to reject them entirely. Their purpose is to confuse, disrupt, divide, and ultimately, waste your time. Perhaps more importantly, commentary on our history by hostile and dishonest outsiders can never have any validity.

A Juneteenth Worthy of Celebration