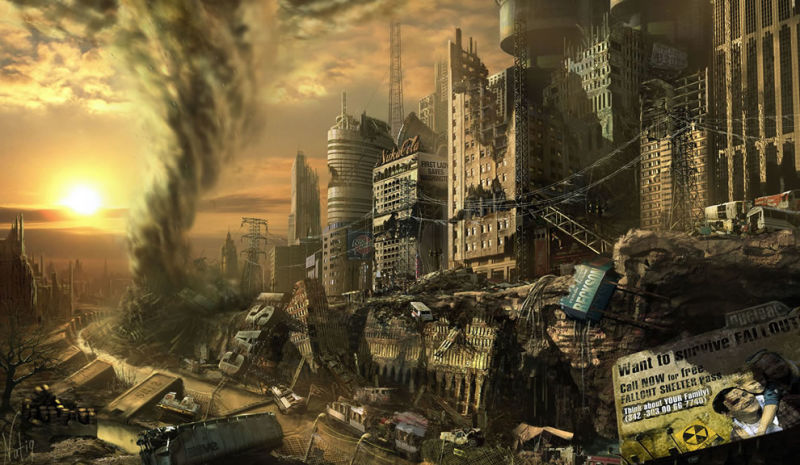 Just as a thought exercise, I want to examine four possible ways our civilization comes to an end. There isn’t anything special about this arbitrary number of potentially ruinous conclusions, I picked the number at random, I swear.

1. Techno-Corporate Totalitarianism
With the obvious withering of empires and senility of nation-states, it could be that the next paradigm is a multi-headed global corporation achieving complete dominance empowered by limitless surveillance capitalism and totally unrestrained by “rights”, “local governments”, or “democracy”. There will be only the consumer/worker enthralled to a crushing despotism of targeted advertising, social credit systems, and the tyranny of Karen down at the local HR precinct.

While this might actually be the de facto arrangement even in today’s world, I think that a true dystopia involving a world government of Amazon.com and Google is somewhat unlikely because these massive capitalist entities are essentially subsidized by the existence of nation states willing to use police and military force to uphold the property norms required for the efficient functioning of markets. In that regard, I think there is a parasitic dependency of capital on that state and it might not be able to transition into assuring its own existence, particularly not without just transforming into a nation-state itself full of the same attendant limitations.

2. Mad Max Civilizational Collapse
I think this outcome is much more likely because versions of it have already happened several times. The wheels come off, capitalism eats itself, the current system fails to produce enough bodies to sustain civilizational stability and the only choice left is whether to work for Lord Humongous or Dennis Hopper with an eye-patch. We get this ending because entropy, death-spirals, feedback loops, and human laziness naturally trend in that direction.

As miserable as we might be from getting chafed by our leather pants and riding around in salt-water with Kevin Costner all day, this eventuality at least gives us the opportunity for a new future when we aren’t running from guys named “Rictus Erectus”. Sure the US might have to endure a few generations of various Hispanic narco-gangs squatting in Washington DC and proclaiming themselves to be the new patriotic American conservatives, but this cycle has played out countless times before and eventually we get civilization again.

3. The AI Evolution and Human Extinction
Nick Land was right. Capitalism was just an AI all along, and as humans go extinct, we’re replaced by machines. In the far flung future, the planet is covered with androids selling Funko Pop Star Wars figures to each other. Bitcoin is the new world reserve currency.

Eventually aliens make contact, and after their probe sends back footage of anodized titanium asses twerking to synthwave, they unleash a zero point energy weapon that obliterates the entire Milky Way Galaxy.

4. Revolutionary Political Struggle
It’s possible that a group will evolve in the west that has an immunity to hyper-media and fundamentally answers or transcends the crisis in meaning brought on us by the deterritorialization of consumer capitalism. Whether or not this is a real dystopia depends more on the beliefs of the revolutionaries themselves and which end of the gun you’re on. We can really hypothesize only so far on what a new revolutionary political order might look like, but I believe it would have a few general characteristics.

Firstly, I think they will operate outside of the hyper-media environment and only interact with it for the purposes of informational terrorism. Hyper-media itself is just too toxic, disorienting and penetrated by the current establishment to offer much value to political dissidents beyond an avenue for disruption. Secondly, they are likely to look on our current individualist conception of human rights as being the archaic naivete of dumb peasants submitting to the Divine Right of Kings with an equally imbalanced set of concomitant power relations that services the needs of the market over the community. I’m hesitant to describe such a movement as either “left” or “right” but it will necessarily have to shatter the grundnorms of capitalism which means both neoliberalism and conservatism will be annihilated right along with it. Likely the focus will be on creating a world that is actually compatible with living, reproducing human beings and provides them with a sense of oriented continuity. How this is accomplished could make it a dystopia by the standards of our era or a paradise.

This is just a thought-exercise though, just some idle theorizing, be sure to cover all your bases by investing in Bitcoin and lots of studded leather pants.