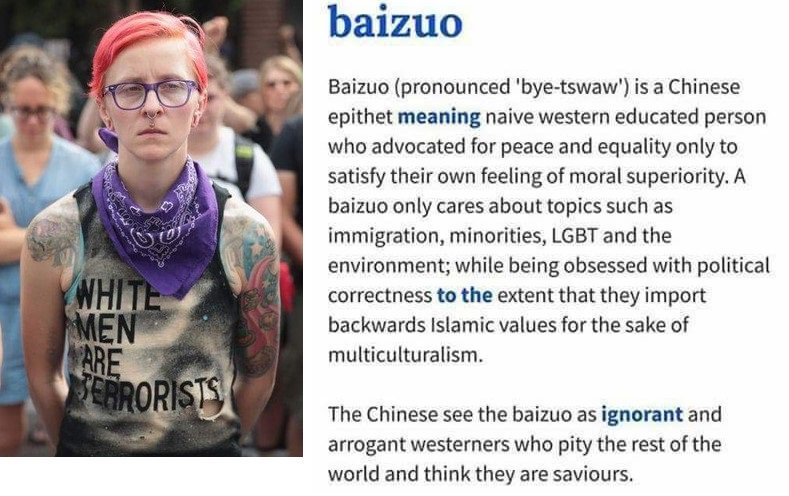 The emergence of the modern white left in Western countries is probably one of the more mischaracterized and misunderstood phenomena currently plaguing our civilization like a particularly banal, aggressive, and stupid form of cancer. “Conservatives” belonging to the cursed Baby Boomer generation label these woke bourgeois Millenials as “socialists” or “communists”, but to apply such specific ideological categories to a gaggle of superficial brats with no intellectual grasp of either term is giving them far too much credit.

White leftists, or “baizuo” as the Chinese call them are essentially part of a cultural phenomena, not an ideology as such. The substitution of vague sensibilities for substantive philosophical positions makes this a facile product suitable for consumption by women and other intellectually lazy cretins. As Mr. Liu points out in his fantastic essay on the topic, these are “actors rather than thinkers”. The spectacle of AntiFA mobs and leftwing protests are theatrical public performances by countless heroes of their own imaginations, all of them separately living out their own fantasies of fighting “fascism” in lurid displays more closely resembling a Two Minutes Hate than a recreation of V for Vendetta.

While these baizuo might trace a genealogical lineage back to the Frankfurt School and post-modern leftism infecting academia years ago, it’s important to remember that despite what the transgender anarchist on Twitter tells you, nearly all of these people are informed more by the cultural norms of their own insulated cloister than Proudhon, Marx, or Foucault. These are the trailer-trash cousins of academic leftists and they get their “ideas” more from social media, blog-posts and TV than from actually reading anything longer than this article. In fact, were it not for the feedback loop created by clickbait outrage sites like Huffpo creating sensationalist blogposts and then optimization algorithms feeding suggestions for more of the same to anyone reading them, it’s entirely possible the modern “awokening” never even would’ve happened. What we have on display here is an actual form of propagandistic brainwashing used to drive engagement with platforms attempting to sell space to advertisers.

Because this dirtbag leftism is more of an aesthetic style than a cohesive world view, the modern shitlib unconsciously carries over a certain cultural imperialism that arrogantly asserts itself over competing perspectives, even when these viewpoints originate from a non-white individual. Do minorities and “people of color” really benefit from and agree with all the positions espoused by a lily-white liberal arts major with a savior complex, or are they just props for empty virtue-signalling by arrogant narcissists? Given that AntiFA has attacked more Asians this year than their “Nazi” counter-parts, I think we can conclusively say that western leftism is more about the feelings and self-perceptions of white folks than it is about protecting non-whites.

With white liberals essentially running colleges, big tech, and media, you get a predictable outcome. Once again, contrariwise to the lead-poisoned Boomer generation, this is not “fascism”. This is totalitarianism, an attempt to simply erase people and views that evoke feelings of fear and incompetence in shitlibs. Their refusal to debate “the right” is itself based on an inability to argue their own “views” or deal with emotional discomfort that can’t be immediately treated with an SSRI and benzodiazepines. The machinery of capitalism neatly intersects with these aggrieved little tyrants by paying lipservice to their facile demands for LGBTQ and gender window-dressing to completely disarm resistance to larger aims of exploiting everyone equally and turning the entire planet into a consumerist Hellscape. When you don’t have a coherent world-view or critique of actual power, the real oligarchs are free to put on infinite dog and pony shows while they quietly cinch unbreakable collars around your skinny little neck. Notice how AntiFA in recent years functions exclusively as an escape valve for any real rebellious sentiments and those energies are always directed at isolated working class people who aren’t holding the reigns of massive corporations.

Multi-national big business is more than happy to scoop the guts out of academic leftism and let its retarded descendants cloak themselves in the shell of its decaying corpse because ultimately, this boneless simulacra of leftwing ideals can be chopped up into marketable bits and slapped onto products. It certainly hasn’t constituted an existential threat to capitalism in several decades, and what few people do raise salient concerns are doing so via social media posts made from Apple devices. Rightwing critiques are of course safely dispensed with as “Nazism” and the horde of transgender Deviant Art hall monitors is dispatched immediately to their location. Far from selling rope to its own executioners, capitalism instead gives its detractors an official complaint department and then wire-taps the whole thing to build better consumer profiles. Complain about worker exploitation on Facebook and get a targeted advertisement for a “Smash Capitalism” T-shirt from Amazon.com.

When these baizuo make their way into corporations, you get the horrifying visage of hundreds of slack-jawed drones wearing propeller beanies and talking about white privilege, which in this context, sounds an awful lot like a justification for cutting their own wages. Google of course is more than willing to make as many human sacrifices as necessary to the Leviathan of their woke outrage cult, and the vicious cycle of “journalists” targeting the victims of their own smear pieces with lynch-mobs of witch-hunting liberals ready to petition their employers to fire them is only exceeded in scope by the upward ratcheting of censorship on the selfsame platforms the aforementioned “Nooglers” control.

The faces of your future overlords.

Essentially, the final culmination of the baizuo’s individual projects of slave morality and victim-hood call-out culture is to construct a brittle dystopia that over-writes the basic codes of human experience. This will likely prove to be shorter lived than most totalitarian regimes because the central premise is to eliminate all forms of human conflict and their most obvious conceit is the naive belief that banning enough of the “bad people” will make further disruptions to their vapid navel gazing impossible. As any good writer knows, conflict is essential to keep your audiences entertained and a corporate hugbox enforced by a weaponized HR department is gonna have all the shelf-life of 2002’s “The Scorpion King”. Eliminating people for having majority views on most issues, making online debate impossible and denying the basic human reality that people do indeed naturally have ugly, unpopular or controversial opinions will eventually drive down engagement with social media platforms. These are not spaces for genuine human beings and it’s doubtful they ever were. The enforcement of a rigid faux political orthodoxy in which employment is contingent on prostration before the demands of an irrational collection of sado-narcissists will eventually meet with a sharp course correction after enough disgruntled and angry citizens realize they have an enemy with a face. There are consequences for letting deranged shitlibbery run wild in an institution, as we can see with the total collapse of faith in the news media and increasing financial strain on digital media outlets.

In conclusion, I think the sudden rise of the baizuo menace was contingent on certain cultural and technological factors that are unique to a place and time in history. There are definite signs that the short-sighted narcissistic arrogance of the “woke white left” is living on borrowed time and I believe their increasing stranglehold on public discourse will eventually prove to be their own undoing. We have past examples of what happens when socially destructive leftwing movements provoke a response from otherwise reasonable people just trying to live their own lives.

“If something cannot go on forever, it will stop.”

The Scourge of Anti-Racism