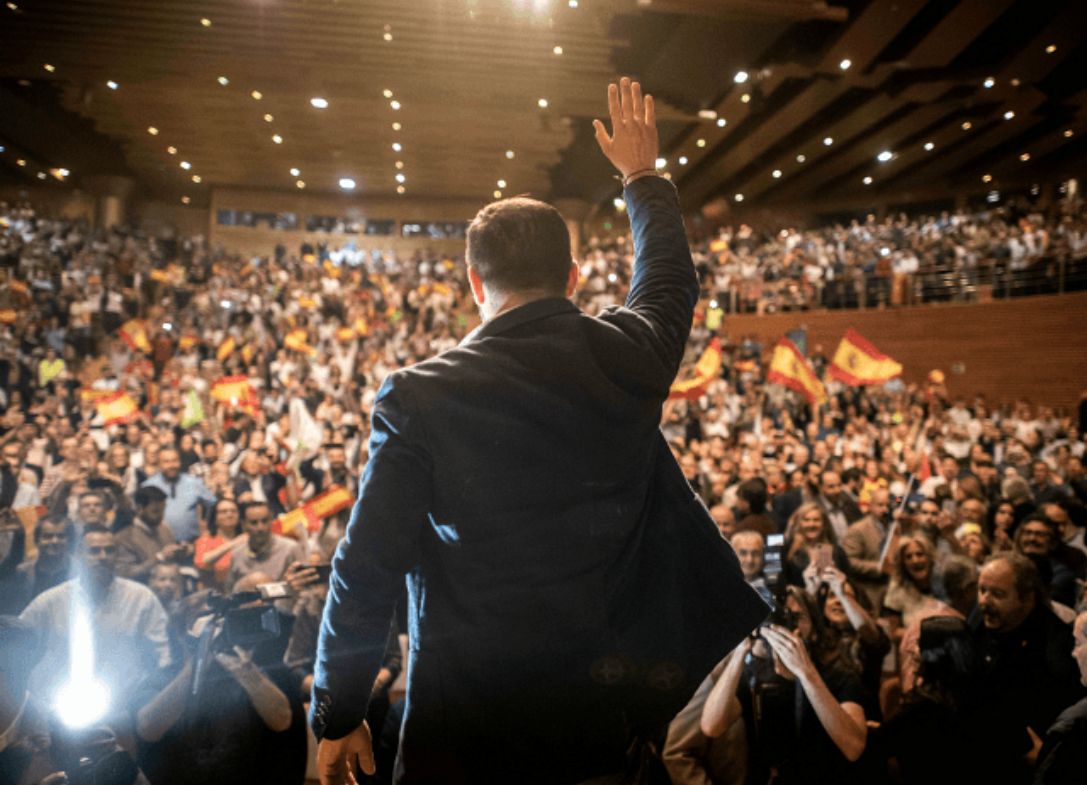 Despite the ruling Socialist party winning a plurality, Sunday’s election was a promising sign for Spanish nationalists. The new right-wing Vox party received 10% of the vote, and entered Spanish parliament for the first time with 24 MPs.

Vox enters at interesting time, as well. This is the third Spanish general election in the past four years. The two parties which have ruled Spain for decades are both experiencing a legitimacy crisis. Two separatist movements are growing problems. Spain has become the number one entry point for refugee invaders coming from Africa. The country is near the point of political crisis. A vacuum is opening, and nationalism has the opportunity to fill it.

Since the end of Franco’s rule in 1975, Spain has been dominated by two major parties—the Socialist Workers’ Party and the conservative Popular Party. This week, the Popular Party narrowly retained its status as the second most popular in Spain by earning 66 seats, a loss of more than half since 2016. The Socialists gained seats, but came away with 29% of the vote, not nearly enough to govern without a coalition.

This election was called because of the Socialist party’s inability to pass a budget with its coalition partners. After the election, it is unclear what has changed to make the new coalition government (which has yet to be formed) any more functional than before. Meanwhile, the conservative right is falling apart. After botching the Catalonian independence vote in 2017 and being ousted from government for corruption in 2018, the Popular Party is caving. The center-right Citizens Party (57 seats) is competing with Vox to fill the void.

The question is whether Vox is up to the task. As of now, the party has next to no track record to go off of. On the positive side, its rhetoric is extremely nationalistic. After the election results came in, Vox leader Santiago Abascal told a room of supporters, “We told you we were going to begin a reconquista of Spain, and that’s what we have done.” The rhetoric of reclaiming the Spanish nation figures heavily into Vox’s message. The party regularly uses the term “fatherland” to describe Spain. Undoubtedly, this rhetoric is largely rooted in anti-Muslim sentiment. After all, the original Reconquista was a campaign to expel the Muslim occupiers of Spain, which ended in the 15th century.

However, there is a different, non-racial interpretation of this rhetoric. Through much of its history, Spain has dealt with separatist movements from Catalonia and the Basque region. The Catalan separatist movement gained national attention when it held a referendum in 2017, in which the vast majority who made it through the Spanish police and to the polls voted to separate from Spain. The Basque are an ethnic group with ancient ties to the region, which precede the introduction of Indo-European languages. Since its incorporation into Spain, there has been a Basque separatist movement, often with a violent element. Because of this context, Spanish nationalist rhetoric does not apply only to outsiders (Muslims, Africans, etc.), but also to insiders who seek to weaken Spanish unity. This has allowed the rhetoric of the “fatherland” to reach a wider audience, but also allows for a civic nationalist interpretation.

Vox has one glaring weakness, and it’s one that many right-wing parties in Europe suffer from: an unnecessary allegiance to Israel. From Tabletmag:

“Of all the parties that ran in Spain’s April 28 parliamentary elections, it is the far-right Vox, which burst onto the national scene late last year, that is most openly supportive of the State of Israel. In a document published on its website, ‘VOX, Israel and the Middle East,’ the group praises Israeli democracy and the Jewish state’s struggle against Islamic fundamentalism while condemning the BDS movement and affirming that ‘ties between Spain and Israel should be deepened in all areas.’ The admiration has, at times, been reciprocated from Israel. ‘In the name of the Likud Party, I want to wish Vox and its president [Santiago Abascal] a great result in the general elections,’ Likud Foreign Affairs Director Eli Hazan tweeted the day before the election.”

Vox even replaced a candidate at the behest of Jewish groups:

“In March, however, Vox crossed a line. The party nominated as a congressional candidate Fernando Paz to run for Parliament in Albacete, a city in south eastern Spain. Paz is a journalist and right-wing historian, who was known for saying the accepted historical account of the Holocaust is ‘far from having been established with accuracy,’ for calling the Nuremberg trials a ‘farce,’ and for having presented his book at the Madrid headquarters of La Falange, an openly anti-Semitic party of unequivocally fascist ideology. Vox was finally forced to back down and replace Paz as a candidate only after the Federation of Jewish Communities of Spain condemned the nomination in a statement that read, in part, ‘In any European country where justice was served in connection with this traumatic episode of history, it is unthinkable that such a person with such views would present himself for public office.’”

Whether a party with this stance on Israel is prepared to do what is necessary to truly reconquer Spain remains to be seen. But the opportunity is there for a nationalist resurgence in Spain.

The Real Injustice Addressed by Reparations

For James Watson, the Truth is No Defense