For James Watson, the Truth is No Defense 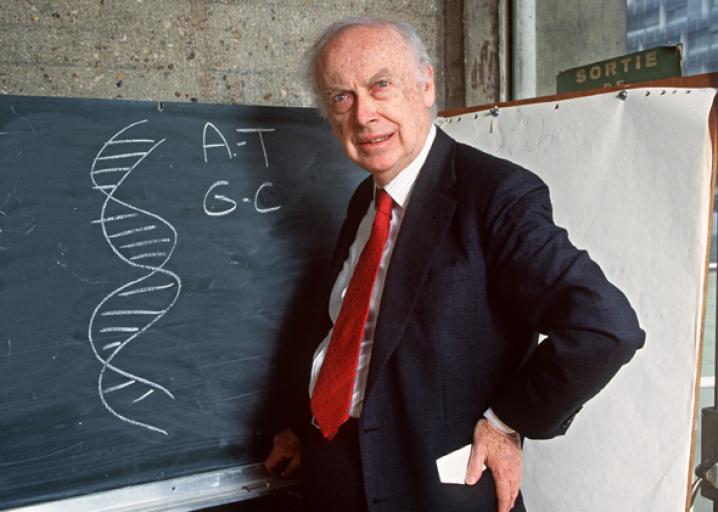 James Watson, who won a Nobel Prize in 1962 for discovering the structure of DNA, has been blacklisted from the scientific community, and polite society in general, since 2007. Since then, he has been forced to retire from his job as chancellor of the Cold Spring Harbor Laboratory on Long Island, shut out from all other opportunities, and endlessly criticized by other scientists and the media. Certainly, for this to happen to such an accomplished scientist, one would think he must have done something unethical, or perhaps published incorrect findings.

No. In fact, the opposite happened. Watson was unpersoned for his honesty about the objective scientific facts on race.

In 2007, Watson said he was “inherently gloomy about the prospect of Africa” because “all our social policies are based on the fact that their intelligence is the same as ours, whereas all the testing says, not really.” Speaking on equality of the races, Dr. Watson said, “People who have to deal with black employees find this not true.”

Nothing malicious. Nothing rude. Watson just stated biological facts that have been found over and over in every test ever done on the subject of intelligence. But in the modern West, people are strictly forbidden from speaking the truth about race—even decorated scientists such as Mr. Watson.

The issue was dug up again after Watson appeared on a PBS documentary called “American Masters: Decoding Watson.” In the documentary, Watson is asked if he has changed his views on race. He replies, “No. Not at all. I would like for them to have changed, that there be new knowledge that says that your nurture is much more important than nature. But I haven’t seen any knowledge. And there’s a difference on the average between blacks and whites on I.Q. tests. I would say the difference is, it’s genetic.’’

Why would his views have changed? The data is still the same. Whites still test significantly higher than Blacks on IQ tests and other standardized tests. In fact, multiculturalism, civil rights, affirmative action, and Black empowerment have only further proven that Watson is right. Blacks have been given ample opportunity to demonstrate that they are equal to Whites. For Watson’s critics, the results can only be seen as an absolute failure.

The New York Times used the documentary as occasion to publish a hit piece on Watson, now 90 years old. In that article, the NYT uses words like “unfounded” and “unsound” to describe Watson’s views, but never refutes his claims. The writer includes quotes from several scientists, not to refute the factual nature of Watson’s claims, but to attack his character. The closest thing to a counter-argument presented is to mention so-called “environmental differences” as a possible reason for the IQ gap (the writer doesn’t seem to realize that she’s actually admitting that there is an IQ gap by including this argument). The article also includes a laughably bad attempt at a rebuttal made by David Reich, a geneticist at Harvard:

“But in his recent book, ‘Who We Are and How We Got Here,’ he explicitly repudiates Dr. Watson’s presumption that such differences would ‘correspond to longstanding popular stereotypes’ as ‘essentially guaranteed to be wrong.’”

You would think that a consensus in the scientific community—one so strong that no respectable professional is even allowed to have it—would have a lot of data to back it up. Instead, it’s the exact opposite—all the data says that Watson is right. The “consensus” is just social theory and wishful thinking.

It doesn’t matter, because this isn’t about science. It’s about total control over how the country talks about race, and destroying anyone who steps out of line.

Watson is a victim of the anti-White social justice mafia which has a death grip on this country. Because one of America’s most prominent scientists had given away the scientific community’s most closely guarded secret, he had to be punished. Science is an area where it is imperative that the official narrative on race be upheld. If scientists were allowed to talk honestly about race and IQ, the narrative would be destroyed overnight.