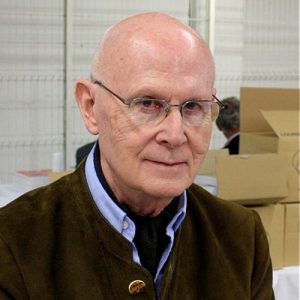 The far-right has been plagued for years by a problem many are aware of but too few are capable of articulating with any nuance. There have been a few clumsy memes and some grumblings about the worst of the bad actors, and precious little else. I’m talking of course about the toxicity and stumbling blocks created by the various narcissistic grifters that glom onto broader political movements like so many egomaniacal barnacles on the hull of a vastly larger ship. Like any infestation of parasites, they drag down the host and divert limited energies into unproductive directions. How can you develop influence over political outcomes if your “leaders” are just siphoning off resources and attacking each other more than the real enemy?

History is just repeating itself again though, and a veteran of the Algiers Putsch named Dominique Venner wrote about this over 50 years ago in an essay called “For a Positive Critique“. I consider the writing to be a seminal treatise that accomplishes exactly what the title suggests: It’s a check-list of pitfalls for right-wing nationalistic movements to avoid. He even specifically names the type of archetype causing these problems, referring to them as “Notables”.

What is a “Notable”?

Venner draws a strict distinction between “notables” and “militants”. Militants are the rank and file footsoldiers of any political movement, the boots on the ground, the ones that actually get shit done. The militant is committed to achieving tangible political goals and is guided by an over-arching doctrine. He doesn’t follow a man, he follows an idea.

The “notable” on the other hand is simply a highly visible person who makes all the right noises. He isn’t someone that’s risen into his position in the limelight through hard work; this is an “idea man”, and an opportunistic one at that. Notables are self-aggrandizing narcissistic conmen not altogether different from aspiring cult-leaders. How many of their beliefs are genuine and which number are simply the exponent of calculating which buttons to push for maximum attention is a subject ripe for speculation.

I think our modern internet age and social media environs increasingly favor the ascendance of these characters by providing them with a ready platform and access to willing sycophants. Any idiot with a microphone and webcam can now start collecting upvotes from credulous political partisans desperate for “content”. There are plenty of decent individuals out there exploring right-wing issues purely out of their passion for the subject, but these creators generally aren’t going out of their way to cause problems.

Characteristics of the Notable

Notables are fortunately not that difficult to identify and separate from the honest community members. I think there’s a few dead give-aways that should make you intensely suspicious of any public figure exhibiting these traits.

A notable usually doesn’t “do things”, they “say things”. They’re good at saying things; they have a lot of “verbal virtuosity” and stage presence. Your average E-celeb is just someone with the free time to live-action shitpost about controversial rightwing political topics. A significant proportion of them are relatively young, unmarried, childless and just stumbled into 5 minutes of YouTube fame. They tend to lack the sorts of careers that would distract them from camping out in the most active areas of the online map, always looking to increase their audience while simultaneously e-begging for a big enough revenue stream to make adult obligations irrelevant. Leaders start organizing people in the real world, notables engage in mythomania and talk of revolutions that will never come. Does anyone wanna follow a guy that’s never even worked an actual job?

2. Disregard for their own followers and fellow travelers.

As Venner states in his essay, the Notable believes the “militants are an inferior class”, and “are only the rank and file to be used for political struggles”. There are sadly enough literal examples of this type of thinking in alt-right politics among would be “leaders”. To these careerists their audience is an expendable resource to be burned whenever it is convenient to them. They are not personally invested at all in the sorts of people giving them a platform beyond the most short-sighted material benefits and attention. Individuals that should be viewed at least nominally as allies are verbally assaulted, “doxxed” or otherwise discarded as “enemies” for any perceived slight, no matter how minor. The underlying dogma is that their fragile egos matter more than any over-arching political aims or goals.

Notables are capricious narcissists. Like any garden variety dirtbag, they’re slaves to the basest of human impulses. Womanizing, embezzling, disloyalty, substance abuse, cowardice, and general shittiness dominate their most visible traits. Unsurprisingly, when caught in some misdeed, these are also the first to snitch and roll over to the police. These are the types of greaseballs that bemoan the loss of morality in western society before trying to seduce their “best friend’s” wife. Beyond the usual assortment of skeletons in anyone’s closet, these types have veritable graveyards full of the bones of a lifetime of underhanded back-stabbing and conscience-free living. If they mistreat their own friends, romantic partners and family, then how can you expect them to do any less to allies and followers in a political movement?

4. Inability to evaluate their own audience.

A more nuanced tell is the notable, like any real narcissist, can burn any level of human garbage to fuel his own ego. All fans are equally valuable regardless of how demonstrably unstable and toxic these demographics might be. A notable doesn’t care if he’s followed by a 15 year old edge-poster or a middle class married man with 5 kids, so long as his ego is being stroked, it doesn’t matter who does the stroking. To the Notable, the adoration of a kissless, forever-alone incel is a heady intoxicant capable of propelling him to dizzying heights of hubris. Sycophancy over substance is the rule, not the exception to the Notable’s cloister.

While Venner uses this term generally to refer to any LARPer living out their personal fantasies, one should be on guard in particular against “leaders” that insist on “dressing in a costume called a uniform”. These are profoundly unserious people that have confused a political movement with a Neo-Nazi version of Comic-Con. Dressing up like Hollywood villains is a great way to convince everyone you’re either a clown or a provocateur on the Federal payroll.

This has to stop

All of this matters because of the very real damage these grifters inflict on our fledgling right-wing movements. By engaging in unceasing purity spirals and infighting, these maniacs drive away reasonable, normal human beings capable of generating real political capital. I believe these pathological tendencies are worsened by the online echo-chambers where ego-maniacal leaders and their dysfunctional followers can insulate themselves into thoroughly self-destructive trajectories. Any self improvement is sacrificed for the soothing of individual egos. Overall success has been hamstrung over and over by the crab-bucketing of jealous narcissists more worried about their own self-aggrandizement than cooperating with their peers.

These are the team-killers, the griefers that ruin cohesiveness and collective strength because they’d rather see it all burn than watch someone else take the glory. How many times has a personal beef or spergcel hatred of a particular figure lead to an outcome that effectively set the broader movement back as a whole? Have we not seen entire organizations destroyed by short-sighted, shameful behavior from the leadership? Is it worth it to tolerate someone that will inevitably betray his friends? It’s time to put our hard-earned lessons to work and leave the Notables behind as we move forward into an increasingly perilous time in global politics.

To do that we must demand more from a leader than simply being a posturing mouth-piece. The leader must work for us as an avatar of our collective will, someone willing to sacrifice their own petty ego for the good of the whole. They are responsible for the lives of many and must act like it. “Leading by example” isn’t just a trite catch-phrase; anyone in this position should be an inspiration, not a cautionary tale.

Stop giving oxygen and audiences to swindlers; just let that bad fruit wither on the vine.

“Zero plus zero always equals zero. The addition of mythomaniacs, plotters, nostalgics, careerists, and “nationals” will never yield a coherent force. Preserving the hope of uniting the incapable is to persevere in error. The few elements of value are paralyzed by the cranks that surround them.”