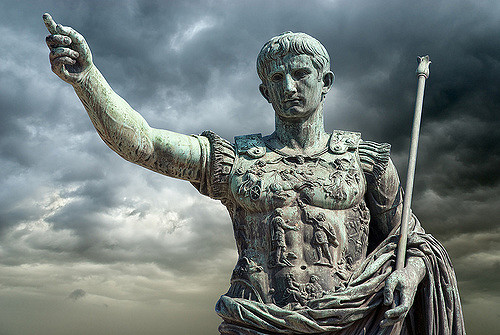 Our fathers, and their fathers before them, from the earliest authors of the bible to the great inventors that launched the digital age, have had a grand vision that has propelled western civilization and its European inhabitants to become the envy of the world. And that envy has boiled into a hatred that now seeks to eliminate everything those great men had worked for. Never in all of record history has man ever become so complacent and willing to sacrifice his inherent greatness in a fit of pathological altruism. It is rather tragic that the European man, in all his glory and greatness, has such a self-defeating defect in his character. The future of the European race depends on conquering this corrosive instinct and replacing it with an unbridled will to power. It is time for Rome to finally conquer Judea once and for all.

No man should be content with his people and way of life being crushed by the will of others. What sort of coward allows himself to become the mercy of the world around him? It is mans duty and ultimate purpose to shape his world, not to become subservient to it. Man should rather die and have the courage to defend himself than to watch in horror and disgraceful cuckoldry as his homeland is invaded by foreigners, his women become a disgrace, his right to speak his mind is stepped upon and his wealth and prosperity is stolen from him. Its hard to believe that any rational living being could find this behavior acceptable, which means that this disease is nothing short of irrational madness.

Ask yourself, would your fathers, and their fathers before them, be proud of you? The great men who conquered the known world would hardly recognize the world they left behind. Not because of technology alone, but from the quality of men that populate the earth. These great men would have more respect for their enemies of their time than their contemporary allies (the author included). When have any group of men in all of recorded history ever had to endure the phenomena that faces us today? There is no precedent for the unhindered invasion that now faces western civilization. Would our fathers condemn us in shame?

And to those whom have grown complacent, what does it take? Where does the line have to be drawn? Or are has the European man reached a state where he is ready to live on his knees? Or does such complacency give comfort and distraction from duty? Are we really willing to hand the world over to the perverse hands of (((globalism))) and (((international tyranny)))? The day man surrenders his will is the day he has disgraced his name and everything his fathers had fought for. He is no better than a feral dindu without purpose and without anything to call his own other than his trail of failure.

What our fathers knew, that we have since forgot, that the world is at our mercy. In the perpetual struggle of the weak versus the strong, it is inevitably the will of the strongest that prospers. However we have witnessed a dramatic perversion of nature’s law, such that now it is the weak that have conditional power and influence over the strong. Through censure, political correctness, and fear of boycott and retaliation, the cultural Marxists have made great strides in their agenda to repress the strong for the benefit of the weak. Make no mistake these people are fundamentally cowards. They are not brave soldiers, and you have nothing to fear by opposing them.

The next stage in man’s development is to evolve beyond his empathy, as his feelings are systematically and rigorously exploited by the weak in an effort to contain and control him. Every instance man wastes evaluating the feelings of others is a step toward the mindless passivity that allows him to be dominated by others. The envy and resentment of the weak leads them to mandate hostile socialistic policies that punish your dominance and success for the benefit of lesser peoples. The weak want you to be as pathetic as them, because then they are less threatened by you and less ashamed of themselves. The left does not want to see prosperity, or success, or the triumph of man because there would always be a lesser man to pity. What is cultural Marxism other than the rabid destruction of what is prosperous and beautiful?

Through (((manipulation))) the cultural Marxists have arbitrarily equated human progress with their own will. They are both the judge and jury in their own self-righteous world. The entire notion of progress is absurd, as it implies that history is converging to an arbitrary ‘end point’. What happens at this end point? Do the credits roll and everyone goes home? Anyone that has more than a liberal’s indoctrinated version of history understands that civilizations go through cycles. There is no end point, just the eternal struggle of competing power in a dynamic environment. These leftists think that once they’ve shoved fag marriage down our throats one time it is settled for all eternity.

And the tactics of the weak in this dynamic environment are obvious. Of course the weak want to disarm the strong. Of course the weak want to falsely accuse you of rape and throw you in prison. Of course the weak want to take you’re your wealth and power for the benefit of the feeble. Because how else could they control you? How could a wussy androgynous fruitcake ever rise to any sort of position of authority otherwise? Such a being does not posses any natural power, and thus the left seeks to compensate for this reality by establishing artificial power. And such power is as artificial as it sounds. It is entirely dependent on the will of the strong, for if the strong were ever to be awoken, that power would cease to exist. And without that artificial power, these leaders would be only what they are, wussy androgynous fruitcakes.

And the left are afraid of this. They are well aware that if it ever came down to conflict, they would be left in the dustbin of history out of sheer inevitability. The left is effectively a parasite that grows under the blanket of stability and safety provided by its more powerful host. But when the parasite has grown too powerful, too out of control, and it begins to bite that hand that feeds, does man say that enough is enough? Or does he let himself be consumed.