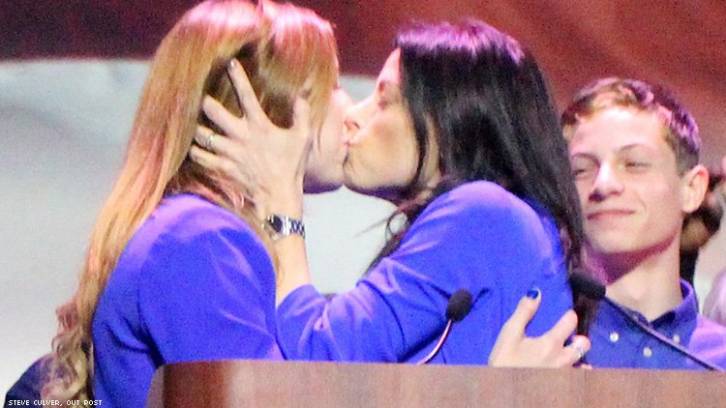 According to the affidavit, the two men traveled to a house in Dexter, Michigan in December 2019 that they mistakenly believed belonged to Daniel Harper, an anarcho-communist podcaster.

The men then posed for pictures outside the house, which belonged to a family not related to Harper, and then posted the images on Telegram with the caption “The Base sends greetings to Daniel Harper of the Antifa podcast “I Don’t Speak German.”

Both the FBI and MSP say that the two men were members of “The “Base,” which they characterize as a far-right militia group. According to the complaint, because The Base has “a logo, a leadership structure, and defined membership criteria,” Attorney General Nessel, a lesbian and gay activist, will be arbitrarily classifying it as a “gang” and prosecuting them as such.

The Base is widely speculated to be an elaborate FBI honeypot intended to entrap white men. Last summer it was revealed that its leader Rinaldo Nazarro is a former FBI analyst, ex-CIA operative and private intelligence contractor. The loosely associated group has yet to be linked with any act of terrorism.

In the case of Watkins and Gorman, neither of the men are accused of any conspiracy to hurt Harper or the family who lives in the house they photographed. The decision to charge the men is legally creative and politically selective, but could net them decades in prison if convicted.

Michigan, a swing state, has seen accelerated FBI and state police entrapment activity in the last few weeks against right-wing white men under Nessel. Joe Biden’s campaign has made combating “white supremacist terrorism” one of their keystone issues as the 2020 election approaches.

Going to a political rival’s home is a distasteful act, but it is primarily a tactic leftist groups have pioneered and have never faced criminal charges for.

Last year, journalist Andy Ngo had members of “Antifa” menacing his elderly mother outside of her home just months after receiving a vicious beating from them at a leftist rally. In 2018, Tucker Carlson had the Washington DC chapter of “Antifa” besiege his private residence, where they broke down his door with his wife and children inside. Carlson was later forced to move out of the property due to the intimidation. Neither local police or the FBI have ever shown interest in arresting the individuals responsible, although in Carlson’s case one of his harassers, Joseph Alcoff, is facing charges for a violent hate crime in an unrelated incident.

Reporting by National Justice and other media entities have registered a recent desperate surge by the FBI against individuals they believe may have right-wing beliefs — behavior that is confusing in light of months of non-stop murders and rioting by Black Lives Matter and anarchist groups that mostly go unpunished, the latest example featured in Philadelphia.

The desperation of FBI agents and legal ingenuity of prosecutors is due to pressure from Congress to unearth and prosecute right-wing white men. Despite spending enormous amounts of money surveilling and harassing libertarians, Trump-supporters and white nationalists, the FBI has struggled to find people engaging in serious criminal activity. This may be the reason for why they are four months late in delivering their “white supremacist domestic terrorist” report to House members Adam Schiff and Andre Carson.

Failing to meet the white terrorist quota politicians, donors and media have set puts the FBI in an existential bind, as Congress has the authority to control their bloated counter-terrorism budget, which costs the taxpayer billions of dollars every year.

Political headhunting by the FBI in recent years has drawn widespread condemnation and criticism from figures as diverse as Donald Trump, left-wing journalist Glenn Greenwald and Marxist publication The Jacobin.