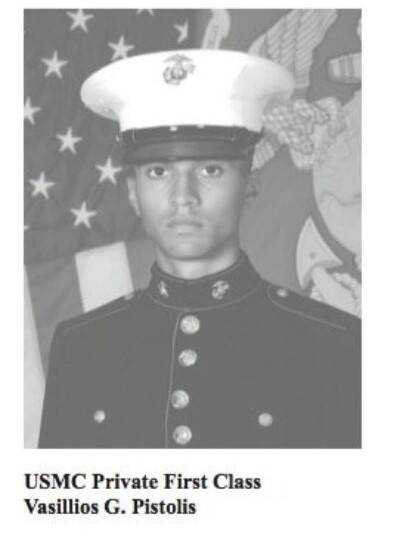 A former serviceman who has been subjected to years of death threats from Antifa groups and aggressive harassment from the FBI has decided to speak out about the terror and mental anguish he and his family have been forced to endure for two and a half years.

North Carolina based Vasillios Pistolis first made headlines in 2018, when far-left activists “doxed” (revealing a private citizen’s personal information to hurt them) him as an active-duty Marine who protested in defense of the Robert E. Lee Statue at the Unite the Right rally in Charlottesville on August 12th, 2017.

Aside from being discharged from the Marines Corps for engaging in political advocacy, Pistolis has not been charged with any crimes.

Shortly after a deceptively edited hit piece by left-wing NGO Pro Publica that featured Pistolis aired during the summer of 2018, he was plucked out in the middle of a training exercise by his superiors.

Then the nightmare began. “My superior officers were all in the dark about what was going on. They took me to a special office, where NCIS (Naval Criminal Investigative Service) agents were waiting. I was grilled for hours about my political beliefs and whether I had attended the rally in Charlottesville. My laptop and phone were confiscated pending the investigation.”

Under intense pressure from politicians and far-left journalists, the Marine Corps moved quickly to get Pistolis out and turn him into a scapegoat. Pistolis was subsequently dragged before a military court for violations of the Uniform Code of Military Justice. He was charged with disobeying a lawful order by participating in an “extremist rally.”

The rule is loosely defined and the punishment is steep if you lose at trial, so Pistolis decided to take a plea bargain that gave him 28 days in the Brig (military jail), which he served before being discharged.

After leaving the Marines and finishing his punishment, Pistolis believed the ordeal was over. Then he and his family began receiving a barrage of threats.

“After I was doxed by Pro Publica, I began keeping tabs on various Antifa and communist paramilitary groups in my state. I was shocked to see how openly and brazenly they would conduct “intelligence” on my whereabouts, my family members, where I worked, and they would publicly express intent to assault and kill me.” The conditions of Pistolis’ discharge do not ban him from owning a firearm. When the threats refused to die down, Pistolis sought a permit for a handgun for personal defense.

The county Sheriff turned him down, citing his political beliefs twice, once in 2018 and again in 2020, as the sole reason under a rarely used and likely unconstitutional North Carolina statute.

“I couldn’t believe it. The people claiming my presence at the Lee statue protest made me a terrorist threat were actively making terrorist threats against me. The police were completely uninterested in my well-being and I felt I had no choice but to buy a gun to protect myself and my family.”

Pistolis provided an email dated May 2020 from his Sheriff’s office, which oversees handgun permit requests, showing that he was denied the right to self-defense based solely on the fact that he had “participated in white supremacy rallies in Virginia and Tennessee, with reports indicating that Applicant participated in assaulting individuals at said rallies.”

Pistolis has not been criminally charged or credibly accused of any unlawful assaults, and both rallies in question were legally permitted and First Amendment protected. The decision was made arbitrarily by the Sheriff based on his perception of the applicant’s beliefs and slanted media lies.

“I thought about fighting this attack on my rights in court, but the legal expenses and the fact that it expires in 5 years both deterred me. I don’t want to assume the worst, but in the context of this application, it’s likely the Sheriff’s office doesn’t like my political beliefs and is fine with Antifa members hurting me or my loved ones.” 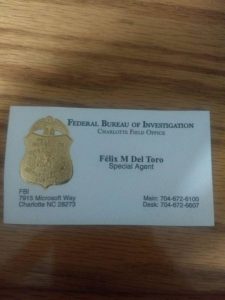 More than three years after the Charlottesville rally, Pistolis has yet to be charged for any criminal activity associated with it or in general, either locally or federally. Yet in recent months, the FBI has been engaging in aggravated harassment and stalking.

“My home was first visited by them in August. The FBI agents dropped in when I wasn’t home and tried to scare my parents, who are older, into getting me to talk to them. I know my rights and I know how the FBI has been pursuing political dissidents on the right lately, so obviously that is off the table” he told National Justice.

It has been widely noted that the FBI has become more aggressive in their entrapment tactics as of late, likely in hopes of creating media spectacles of “white supremacist and far-right domestic terrorists” to aid the Bureau’s preferred candidate (Joe Biden) as the 2020 election approaches.

“Just this month, the FBI has visited my home twice. All three visits were timed for when I wasn’t even home. They have been trying to get my parents to talk to them even though I am an adult man and have already made it clear I do not want any contact with them. They have told my parents that they ‘only want to close’ my case and ‘help me,’ but will not specify any details of what I am even accused of.”

Pistolis told us that FBI agents promised his parents they would give back the electronics taken from him years ago if he just talked to them, again, without specifying about what. Every visit, they have a new story for why they are there, Pistolis said. At this point, he is being forced to retain an attorney in hopes of getting them to leave him and his family in peace.

The FBI claims it does not police political ideology, but this is radically contradicted by the facts on the ground. Even Attorney General William Barr, on paper in charge of the Department of Justice, last month decried the hyper-politicization of the “permanent bureaucracy” for engaging in “headhunting” against politically expedient targets.

The media concocted moral panic about “white supremacists” and Trump-supporting far-right “terrorists” has incentivized prosecutors and FBI agents seeking publicity and promotions to burn massive amounts of taxpayer resources trying to gin up ways to prosecute individuals who aren’t doing anything wrong.

Revolver News has reported that the lead agent who organized more than four FBI employees to entrap over a dozen libertarians in the now infamous Gretchen Whitmer kidnapping “conspiracy” was immediately given a promotion out of Detroit and to the prestigious and well-compensated DC Field office.

As for Pistolis, he ended the interview with a simple statement, “I’m being hounded just because some left-wing extremists have friends in the government and they don’t like what they think my political beliefs are. While our civil rights have been eroded across the board, I didn’t think the right to just live my life as a law-abiding citizen would be one of them.”

Hood: The Best High School in the Country May be Sacrificed to Diversity