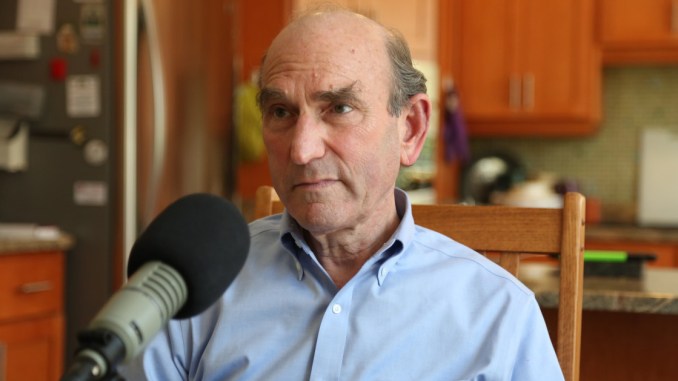 A few years ago, I was naive enough to believe that by electing Donald Trump we would somehow get rid of the neocons and their grip over foreign policy in Republican administrations.

“President Trump’s Iran envoy, Brian Hook, is stepping down and will be replaced by Elliott Abrams, a noted Iran hawk who currently serves as Trump’s envoy for Venezuela, Secretary of State Mike Pompeo confirmed Thursday. Abrams will continue to serve in his role as Venezuela envoy.

Why it matters: Hook had been tasked with executing Trump’s “maximum pressure” policy toward Iran, working closely with Pompeo. That strategy has deepened tensions and thus far failed to force Iran back to the negotiating table, as Trump had hoped. …”

“For this, I am grateful.

Trump has made all of these old fogies and their ideas irrelevant. What must it feel like? The moment when you realize you don’t know shit? Of all of Trump’s accomplishments in this campaign, flushing the neocon parasites and polarizing the “base” against their disastrous foreign policy – to the point where they are now discrediting themselves by openly backing Hillary – has earned a spot near the top of my list.

According to (((Ben Shapiro))), the Alt-Right has literally taken over the Republican Party! That’s a wild exaggeration of course, but it is true that Trump has pulled us into a Mirror Universe where everything is the opposite of what it used to be. …”

So far, we have not taken the plunge into a new war with Iran, but there is no guarantee that won’t happen in a Trump second term once the 2020 election is over. The neocons were not flushed after the 2016 election. We were immediately flushed. Elliot Abrams has returned to power.

At the time, I thought that Trump would dump the neocons like John Bolton and Elliot Abrams. This is what his base wanted. It is what he ran on in the 2016 campaign. Also, there was nothing stopping him from scoring an easy win because the president has authority over foreign policy. Instead, Elliot Abrams was put in charge of regime change in Venezuela and has now been appointed as Trump’s envoy to Iran.

Why did Trump resurrect John Bolton and Elliot Abrams from eternal disgrace after the Iraq War? It is what his donors wanted. He sold the policies to the donors. In a nutshell, there is the whole problem. It is why voting in the 2020 election is pointless. You are not voting for policies which are nothing but election year rhetoric to turnout voters. You are voting to empower one set of donors or another. The donors then go on to get everything they want like the Golan Heights or Jersualem.